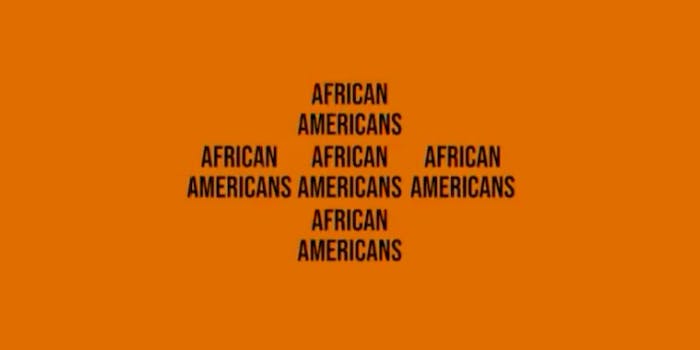 The video uses the N-word and shows old photos of KKK rallies.

A racist, anti-Black video about African-Americans was shared on Discord, reportedly by a white Texas Tech University student. Twitter user Kennedy Evans, a freshman at the university, shared the video on Twitter on Monday, and it’s since gone viral. But now she said she’s facing more racism because of it.

“A student from Texas Tech University sent this video into a channel through discord and nothing is being done about it,” Evans wrote. She confirmed with the Daily Dot that she knows the name of the student who reportedly posted the video, but the Daily Dot was not able to independently verify the identity of the student.

Laced with bar charts and memes, the video, less than a minute long, claims African Americans are at the root of issues such as “property values gone down,” drive-by shootings, “loud rap music at 2am,” and more.

“They all have the same cause,” the video goes on to say and blames African-Americans, ironically with memes that mostly feature Black people.

It then goes on to use the N-word and shows old photos of KKK rallies. It shows a cross made of the text “African Americans” right before a clip showing a KKK rally with a burning cross.

It ends with the text, “Black people suck!”

According to the thread, the video was sent just before Thanksgiving break, and when school officials decided to suspend the student for the rest of the semester, that meant he would only be suspended for a few weeks:

Evans also mentioned others who were actively participating in the conversation and shared with Daily Dot a screenshot showing that one student claimed Evans was blaming white people.

“The entire thread is blaming white people,” the student wrote on the Discord channel. “Sorry I was born white. …

“tbh isn’t it hypocritical that half the comments are about white people,” he wrote. “White people get blamed for everything lmao.”

By early Wednesday morning, Evans was facing further harassment in the Discord channel of Texas Tech Esports, she told the Daily Dot.

According to a screenshot, another user called her a “knappy (sic) haired bitch” for the story reaching the news.

While the video garnered a lot of disappointment and anger from other students and alumni members, there were some messages that were supportive of the video:

“There’s no call to violence so, there’s no reason to say this isn’t free speech,” wrote one, in blatant support for the racist content.

“They can’t dispute them. It’s all true and everybody knows it,” wrote another, whose bio says they’re a MAGA supporter.

In a statement released on Tuesday, the dean of students acknowledged the video had been sent but did not name the perpetrator behind it.

“The matter has been addressed but due to federal law, we are unable to speak publicly about processes or outcomes associated with student behavior matters,” D. Matthew Gregory wrote in the statement on behalf of the university.

Texas Tech did not immediately respond on Wednesday to the Daily Dot’s request for comments.