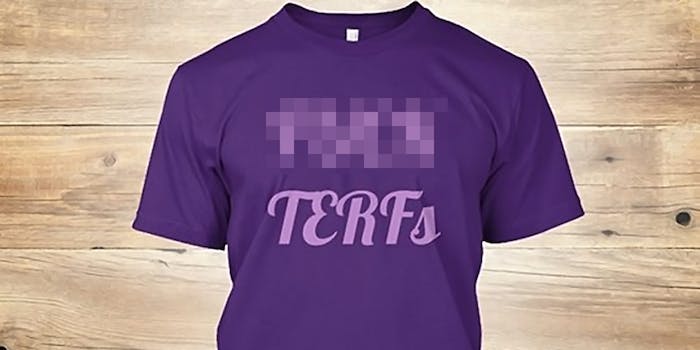 Pride Month is here, and Teespring has a lot of explaining to do to its transgender customers. A transgender designer on the custom apparel site claims her designs were removed for an anti-transphobic sentiment, which Teespring appears to have called “hate speech.”

Elle Clayton, a transgender woman who sells products on Teespring, put together a design that reads “FUCK TERFS” and began selling it on the site through shirts, tank tops, stickers, and tote bags. “TERF” (Trans-Exclusionary Radical Feminist) references transphobic feminists who reject transgender women and try to discredit their gender, remove them from feminist spaces, and sexually harass them both publicly and privately.

“You have got to be kidding me,” Clayton wrote in her Facebook post. “Teespring is aligning itself with TERFs. Only TERFs think ‘TERF’ is a slur or hate speech.”

In an interview with the Daily Dot, Clayton explained that life has “been pretty rough” since she first started transitioning, and that she chose Teespring as an avenue for her designs to “make things a little easier while also giving folks a great message to take to Pride.” But Clayton didn’t expect Teespring to get in the way of her work.

“My campaign was up for about a day, if I recall correctly. I sold about five items and made $30ish,” Clayton told the Daily Dot. “A friend of mine shared it and a TERF page on Facebook picked it up.”

Clayton said the TERF Facebook page “organized to report all of my Teespring campaigns” or designs. Teespring initially claimed that Clayton was “using third-party content,” she told the Daily Dot, so she changed the design to read “TERFS ARE TRASH.” But Clayton said the TERFs reporting her designs “succeed in getting every one of my campaigns terminated” and led to her being “locked out” of her Teespring account.

Clayton suspects Teespring initially didn’t realize what was going on and took down her campaigns without realizing what TERFs represent. But now, she argues the company is doubling-down and hoping the controversy will simply disappear.

“Either way, they had to have learned something about TERFs throughout all of this, and whatever they’ve learned has convinced them to side with TERFs over trans women,” Clayton told the Daily Dot. “At this point, it’s clear that they just want it to go away, and have no interest in listening to us whatsoever.”

You have got to be kidding me.Please help me get as much visibility on this as possible. Teespring is aligning itself with TERFs. Only TERFs think "TERF" is a slur or hate speech.

Here's the original design. Another one that said "TERFs are trash" was also removed. The context is, a broke trans girl tried to make a bit of stamp money, but transphobes decided we can't have that.#BoycottTeespring pic.twitter.com/U4htrWc4Mm

Clayton’s post quickly went viral as transgender women and their allies alike pointed out that Teespring’s policy is dangerous. The word “TERF” is a critical, yet accurate, term used to describe exclusionary feminism, but many TERFs argue that the word itself is a “slur” in an attempt to discredit transgender women who criticize their transphobic beliefs. So by saying that “TERF” constitutes hate speech, many feel Teespring is aligning with those transphobic beliefs.

Twitter users are particularly upset over Teespring’s pro-LGBTQ posts on Facebook and Twitter, while the controversy continues. For many, it’s a sign that Teespring is looking to profit off the LGBTQ community while throwing transgender women under the bus.

The Daily Dot reached out to Teespring regarding its policy and awaits a response.

Hey, @teespring? If you're going to peddle this horseshit, stop trying to bank off of pride, which you're currently doing. No more hiding? Your empowering of TERFs who wish us expelled from society and demonized to the highest degree says the complete opposite. #teespringpride pic.twitter.com/WLHx5LwKs1

A lot of people seem poised to Boycott @teespring over their decision to side with TERFs who harass trans women.

You don't get to claim to support the LGBT community and then actively harass trans people.

You should probably be honest and just say you’re looking for LGB designers, and have a policy of aligning with transphobes. https://t.co/uZvRAwIU3R

TERF cannot be a slur, because it doesn't refer to a group based on gender, race, orientation, etc. TERF refers to an *ideology* – it stands for "trans exclusionary radical feminism"

As Clayton posited, even if Teespring was possibly confused to TERF’s meaning and the politics surrounding the word if and when it was flagged, the company has since reiterated on its policy on “TERF.” Teespring argued in a series of tweets on Tuesday that the company is “not in a position to debate our policies or discuss this issue further” and that “designs that promote or glorify hatred towards people based upon age, race, gender/gender identity, and sexual orientation are prohibited.” That claim is particularly ironic, given Teespring’s lengthy white supremacist, transphobic, homophobic, and racist designs available for sale.

We apologize if you disagree with our decision and for any inconvenience this matter has caused. Please understand that we are not in a position to debate our policies or discuss this issue further. Your feedback has been noted and will remain under consideration.

To maintain a safe & respectful platform, designs that promote or glorify hatred towards people based upon age, race, gender/gender identity & sexual orientation are prohibited. This includes individuals, organizations, or symbols dedicated to hatred against these groups.

Since @teespring is very concerned about hate speech, I went ahead and checked what IS acceptable to their high standards… pic.twitter.com/7SJG7IOR3D

Thought I’d just point out that the policy you cited doesn’t actually protect TERFs at all: it’s not an “age, race, gender/gender identity”, nor a “sexual orientation”. Trans people, however, ARE protected under “gender identity” pic.twitter.com/RrRROvkAYh

@teespring I'd like to understand how you came to believe that TERF is a slur while still allowing gross antisemitism in your store. pic.twitter.com/XhfrfUjLNI

TERF on the other hand means Trans-Exclusionary Radical Feminist. pic.twitter.com/pa2emLYU24

Teespring’s controversy comes just weeks after a queer Latinx artist claimed that Target stole his painting and culturally appropriated its message for an LGBTQ-themed T-shirt. Teespring is just the latest example of a much larger problem the queer community continues to grapple with in 2018: Companies that appear pro-LGBTQ but actually have sinister intentions that leave queer shoppers feeling unwelcome.

“This whole thing has just inspired me to get louder,” Clayton told the Daily Dot. “We need to talk about corporate Pride (and cops at Pride), and at the very least we need to make it clear to companies that want to participate that they need to do a lot better.”

Update 6:11pm CT, June 6: This article has been updated to include comments from Elle Clayton.