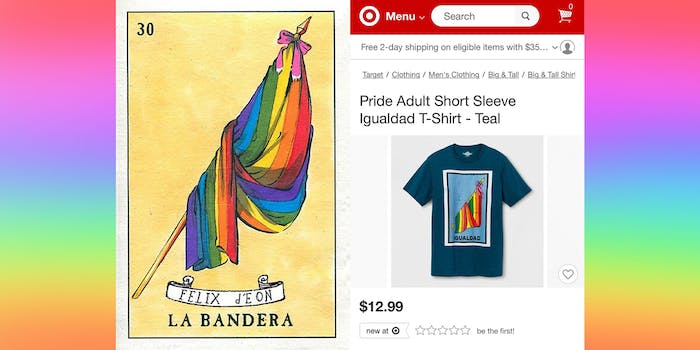 He says Target is engaging in cultural appropriation, too.

Target may be eager to capitalize on LGBTQ pride, but a queer Mexican-American artist claims the company is selling a stolen version of his artwork on a T-shirt.

Queer painter Felix d’Eon was born in Guadalajara, Mexico, studied in the U.S., and currently lives in Mexico City. For one of his paintings, he redesigned the “La Bandera” card from the Mexican chance game lotería, replacing the Mexican flag draped around a pole with the rainbow flag.

Recently, Target was selling a very similar design available on a T-shirt, with the word “Igualdad” written underneath a rainbow flag, which is also draped over a pole. The shirt’s print looks so eerily similar to d’Eon’s work that he openly criticized the company for allegedly “stealing the art of a gay Mexican artist.”

“Target stole a design of mine and printed it on a tshirt,” d’Eon tweeted earlier this week. “Is this how you support the queer Latinx community, @Target, by stealing the art of a gay Mexican artist? I’m curious to hear what you have to say!”

Target has since replied, saying that it “respects the design rights of others and expects our vendors to do the same,” explaining that it removed the shirt from online stores and is discussing the design with its creator, Mad Engine. In return, d’Eon criticized Target, arguing the company is still “profiting” off a stolen design from him in its retail stores.

“Your apology rings hollow so long as the tshirt is available in your brick and mortar stores,” d’Eon told Target over Twitter. “You are still profiting off my work, and appropriating from the queer, Latinx community.”

D’Eon argues that there are plenty of problems with Target and Mad Engine’s design, including the fact that the companies don’t understand the design’s cultural meaning. He believes his design was not just stolen but recreated through a white American lens.