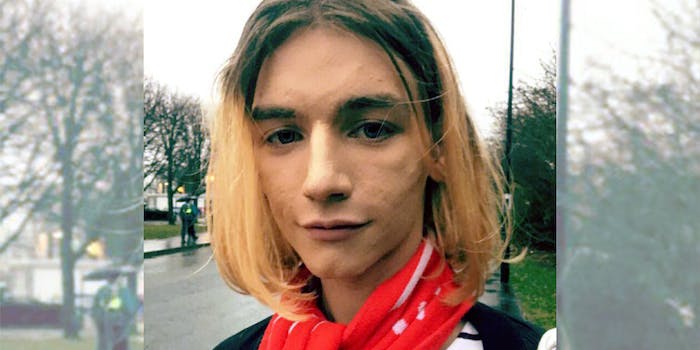 The 19-year-old wants to run for Parliament some day—despite those standing in her way.

Lily Madigan made headlines earlier this year when she was elected to serve as a women’s officer for the United Kingdom’s Labour Party, making her the first transgender woman to ever hold the position. Yet despite a less-than-warm reception by the British press, she’s doing what she set out to do: inspire other trans women to get involved in politics by being an out and visible presence.

“I started campaigning for Labour just before the general election,” Madigan explained to the Daily Dot, referencing June 8’s Parliament election. “I was inspired by Jeremy Corbyn and the Labour manifesto to join up and help out.”

It’s hard to talk about Madigan without mentioning Corbyn. The leader of the Labour Party, Corbyn is a democratic socialist who’s been serving in Parliament since the early 1980s. From the start, he gained favor from Labour’s more left-leaning constituents, thanks in part for voting consistently with his own values over the party’s platform. In 2015, he was elected as the party’s leader, a mere year before Brexit was put to the vote—and he’s since moved Labour in a much more progressive direction, to the delight of many millennials. Including Madigan, of course.

So when the woman who formerly held Madigan’s position resigned amid transphobic comments, Madigan decided to run for women’s officer, which essentially works to involve the party’s women voters. However, it didn’t take long before the backlash started from the British press: The Daily Mail published Madigan’s deadname, a sign of great disrespect to trans people, and misgendered her. Soon after, the Times theorized that she had “forced a woman out of a post representing women, only to snap up a matching job herself.”

“Unfortunately, papers like the Times have a clear anti-trans agenda to push for whatever reason,” Madigan told the Daily Dot.

Madigan even admitted to the Times that she had to involve the police to deal with the harassment. But her situation only worsened after journalist Ella Whelan targeted her.

Whelan serves as assistant editor of spiked, an online libertarian publication based in the U.K. In November, she wrote an opinion piece disparaging Madigan by claiming she “is not a woman” because she is transgender, and therefore unfit to be a women’s officer. The article disgusted the trans community and led trans activist Paris Lees to reject a paid discussion segment with Sky News because she didn’t want to share space with the transphobic writer.

“It’s really irresponsible of you to invite Ella on as it’s disgusting to see someone profiting from bullying a 19-year-old trans woman,” Lees told Sky News back in late November. “I want absolutely nothing to do with it.”

Madigan’s treatment might sound somewhat shocking to American readers, but she claims partisanship runs rampant in the U.K.’s press. It’s a common sentiment among newsreaders in the country, too—one that’s backed up by research.

BuzzFeed News studied the U.K.’s press and found that “fake news” isn’t a problem in the country because the country is already filled with “partisan news stories that stretch the truth to its limits.”

“We have always had a partisan press that people enjoy and have become acclimatised to,” London School of Economics professor Charlie Beckett told BuzzFeed News. “Hyperpartisan news has always been part of our audience’s culture—and we do it better in some ways than fake news.”

Not unlike the rivalries between Fox News and MSNBC, or Breitbart and Vice, factional support controls what people read in the U.K. According to Madigan, certain publications will lean toward the Labour Party, like the Guardian or the Independent. Meanwhile, others like the Times and Daily Mail support the Conservative Party. So when trans issues are on the table, the right-wing side of the aisle is rarely sympathetic. And that’s when young trans women like Madigan are targeted.

“The right-wing press have an anti-trans agenda resulting in about 10 transphobic articles about me in the space of a week,” Madigan told the Daily Dot. “This emboldens a lot of trolls and so I expected a lot of harassment, but I was still surprised when it all happened.”

Transgender politicians face an enormous uphill battle when they run for office, and Madigan’s story represents those problems well. While American journalists have largely given a warm reception to Virginia House of Delegates member Danica Roem, this isn’t quite the case in the U.K. More often than not, the media fuels the flames for bigotry and harassment. And for Madigan, who has a very active online presence on Twitter, that means she’s easy to target. Now, Madigan realizes that certain publications are best avoided.

“I’m not very worried about talking to the press,” Madigan said. “I’m happy to do it, although I’m now much more cautious of certain papers and journalists.”

It’s easy to understand why, as bigoted press is a dog whistle for bigoted trolls. Even though Madigan has activists and allies on her side, online harassment’s toll can be devastating. That became particularly clear in early December, when Madigan turned to Twitter, begging for the abuse against her to end from the British media, saying she felt “so mentally distressed” that she “can’t sleep or eat or go to school.” During the winter holidays, she took a social media holiday, saying platforms like Twitter “foster negativity.” Instead, she encouraged her followers to take a break, too, and watch out for themselves.

“It’s important we all recognise we are human and need to make time for self-care,” she tweeted. “Much love.”

When she is online after a break, Madigan has found a simple solution to deal with the hate: the “block” function.

“I block people if they misgender, deadname, or say anything I consider maliciously transphobic,” Madigan told the Daily Dot. “The reality is the vast majority of those against me on social media fit into this, and so my Twitter is very positive for the most part.”

In a world where political leaders tend to use online social media like a PR brand, or otherwise revert to abrasive vulgarity, Madigan shows that politicians can turn to Twitter to talk directly with their constituents in ways that feel friendly and engaging. She really just seems like another girl online, tweeting about her life. And despite the hate from bigots and trolls, Madigan remains unafraid to open up. That’s empowering for women everywhere—especially trans women.

Not to mention, keeping out the negative noise is a good way to stay focused on her goal: Political representation in the U.K. After all, the U.K. hasn’t had a transgender member of Parliament yet. And Madigan wants to break through yet another glass ceiling.

“I want to be the first transgender MP,” Madigan told the Daily Dot. “I plan to stand for selection in the new year and we will see what happens. It would be great to win, and worst case scenario, I’ll maybe inspire some other trans women to go for roles in government.”