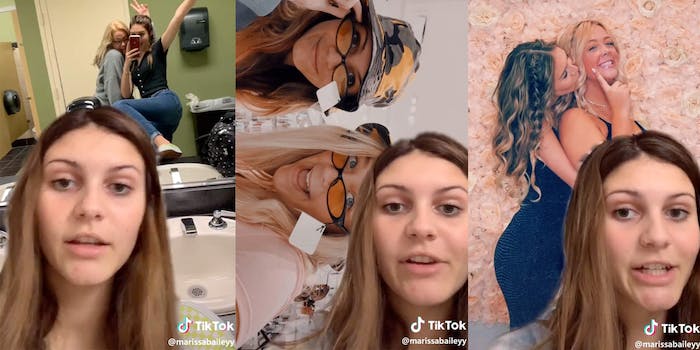 When TikTok user @marissabaileyy posted a video about the drama that nearly tore her friendship apart, it had an unexpected ending. Marissa and her BFF, she announced, were dating.

Marissa explained how she and her best friend Leah drifted apart when Marissa befriended a new girl at school. But when that friendship turned, “toxic,” Marissa and Leah reconnected at a birthday party. “And now seven months later… we’re gay,” Bailey said.

After a minute-long narrative about backstabbing and Snapchat arguments overlaid with photos of the friends, it was the plot twist that few saw coming. “I did NOT expect that whatsoever,” one user wrote.

The video, which now has over 8 million views on TikTok, took off as users shared and commented on what they thought was a heartwarming video. But more astute viewers noticed a hashtag on the post that called the authenticity of Marissa’s story into question: #takeajokeplease.

The video was later posted to Twitter by @blakersdozen, where at first it received positive reactions.

I learned more about personal essays from this one TikTok than from any class pic.twitter.com/PIWKdsEclt

Even actress and writer Mara Wilson commented. “I laughed, I cried,” she wrote.

@lilymischief I laughed, I cried

But many had a change of heart after seeing the hashtags implying the gay comment was a “joke.” “Wow that’s horrendous,” Twitter user @nocturna1sect wrote.

Marissa, whose other TikTok videos show her participating in TikTok challenges and other regular teen activities, did not immediately respond to the Daily Dot’s request for comment.

Was the friend story with a romantic twist-ending just a ploy for likes? It wouldn’t be the first time TikTok users pretended to be gay for clout.

Back in October, user @vulang posted a romantic video of him and another boy. Their video got a positive reaction until it was debunked by one of their classmates. One of the boys later said they had faked their relationship to poke fun of other couples.