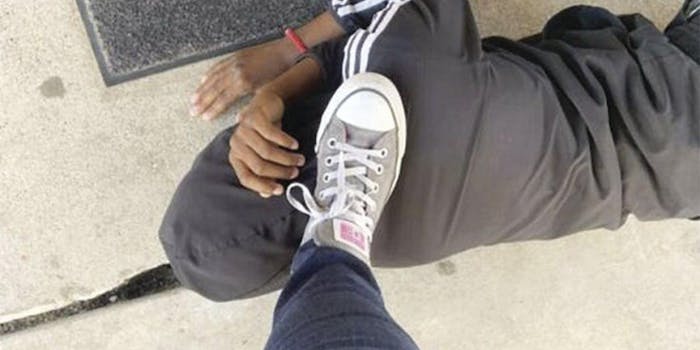 'I didn't like it from the moment I seen it.'

A Greenville, Texas elementary school teacher is being investigated for a staged photo of her foot on an 11-year-old Black student’s neck. According to the Dallas Morning News, she purportedly texted the violently racist image to the boy’s mother and did so on the day of Derek Chauvin’s conviction as a “joke,” warning if he didn’t turn in an assignment.

Chauvin, a former Minneapolis police officer, was convicted this week of murder for killing George Floyd, a Black man, by putting his knee on Floyd’s neck.

According to WFAA and the Greenville school district, the photo began circulating after it was posted to social media. The boy is a student at Lamar Elementary.

“I didn’t like it from the moment I seen it,” the boy’s father Shamell said to WFAA. “I’m very mad about the situation.”

“We take this situation very seriously. It will be thoroughly investigated, and appropriate action will be taken,” said superintendent Demetrus Liggins in a statement provided to Herald Banner. “We have heard from many community members, and we understand their concern and anger.”

The identity of the teacher has not been made public, but the employee is on administrative leave, per WFAA.

“With what’s going on in the world right now that ain’t nothing to play about at all,” the boy’s uncle said to WFAA, relating to the swirl around the Chauvin conviction. “Whether he agreed to do it, she asked him to do it, it don’t even matter. He’s 10. He don’t know no better. She [does] though.”