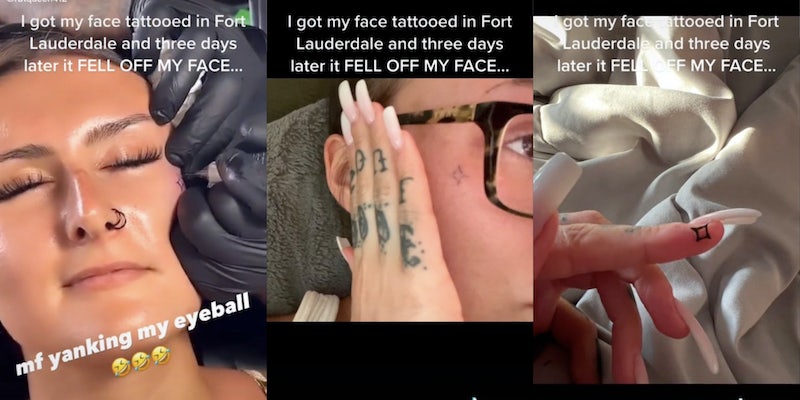 ‘Nobody believes me when I tell them my thigh tattoo fell off’: Woman says tattoo ‘fell off’ her face

'My finger and back of the ear and arm did the same.'

When someone gets a tattoo, they generally believe it to be a permanent addition to their body. But as TikToker Alaina (@ratqueen412) recently shared, that isn’t always the case.

In a video with over 1 million views, Alaina says a tattoo she got on her face in Fort Lauderdale “fell off” after just three days.

While startling, Alaina’s problem is surprisingly common, as some TikTok users noted.

“Nobody believes me when I tell them my thigh tattoo fell off,” wrote one user.

“My finger and back of the ear and arm did the same,” added another.

As Inked Magazine explains, the tattoo isn’t really “falling off.” Some skin peeling off is normal during the recovery process, but if the tattoo artists doesn’t go deep enough, “the tattoo won’t stick and will be more prone to rapid fading.”

Furthermore, “If your tattoo is applied poorly or applied in a tricky location, it is not only susceptible to rapid fading, but pigment fall out. If you notice large chunks missing from saturated areas of your tattoo, then some fall out has occurred.”

This explains why some areas of Alaina’s tattoo are still visible at the end of the video after the ink has “fallen off.”

In the comments of a follow-up, Alaina confirms that the artist simply “didn’t go deep enough.”

The follow-up also reveals that Alaina got the area inked again, resolving the issue.

While some were critical of the tattoo in the original video (“Consider yourself lucky,” reads one highly-favorited comment), the follow-up showing the final version seems to have turned the opinion around.

“Okay this is actually cute, much better than how it looked before,” shared a commenter.

“It looks a lot better than the first time,” contributed another. “Maybe it was a good thing.”

And for the face-tattoo haters, Alaina wrote, “I wish i knew lol. they act like it’s some kind of life altering thing LOL.”

“I still have my same job and [it] can be covered with makeup if REALLY needed,” she concluded.

Update 11:48am CT, Oct. 6: In an Instagram direct message exchange with Daily Dot, Alaina claimed the original artist has not gotten back to her despite repeated attempts to get in contact.

“After it was done I could never get in contact with the shop,” she recounted. “I called multiple times with no answer. I had even left a bad review to get their attention. I never received a call back.”

Instead of the original artist, Alaina said she got tattoo artist Richie Vomit to fix the ink, whom she describes as “amazing.”

“I’d let everyone know to definitely research any artist prior to getting work done by them,” she wrote. “Tattoos and piercings are not something to play around with when it comes to going to somebody that you don’t know and trust.”

And to those who say the face tattoo will negatively affect her job prospects, Alaina rebukeed the tired trope with ease.

“I have a career and I am fully employed,” she detailed. “My face tattoo has not affected me negatively in any ways.””If you like it, get it!” she concludes. “F*ck what other people say.”