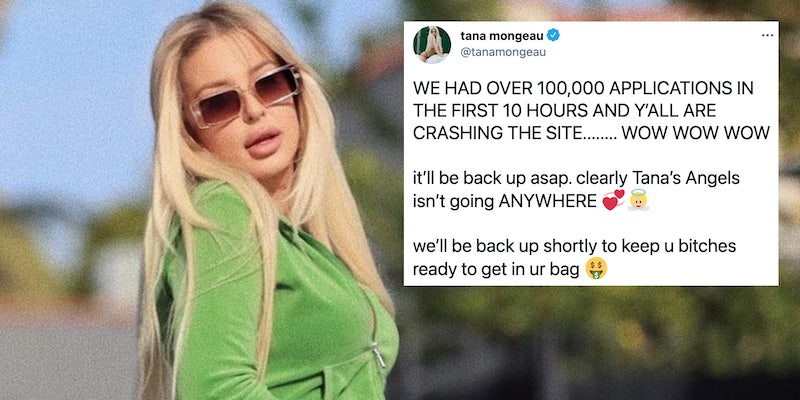 Some adult creators are not happy with this new deal.

Internet personality Tana Mongeau is being called a “pimp” on social media after the model announced plans to start a paid mentorship program.

In a tweet on Sunday, Mongeau unveiled “Tana’s Angels Agency” to provide paid coaching for users looking to become an online influencer.

Mongeau last May launched an account on OnlyFans, a subscription service where users can upload adult content of themselves, and reportedly earned more than $3 million in just one month.

Capitalizing on the success, Mongeau is now offering to teach select followers how to utilize sites such as OnlyFans in order to generate cash as well.

“After receiving tens of thousands of messages daily from people asking me how I make money on OF and as an online creator… my team and I KNEW it was the time to partner with Unruly Agency and Tara Electra to start my very own agency,” she said in a statement.

Launched with the help of social media marketing company Unruly Agency, Mongeau claims that her new venture aims to “give the power back to creators.”

“Throughout my career I’ve been taken advantage of more times than I can count,” Mongeau told US Weekly. “I am starting TAA to teach people how to not make the mistakes I made early on in my career. I understand more creators are born every day and we’re in a creator culture.”

But not everybody is convinced. Multiple users on Twitter noted that Mongeau’s success on OnlyFans is linked directly to the fact that she was already famous when she signed up.

“Tana is making money on OF bc she’s already got a name. You being in her agency does not guarantee you the same success she’s had,” @GiaPaige argued. “You don’t need an agency to succeed at OnlyFans, you just need a fan base and that can take a while.”

Others outright accused Mongeau and her Tana’s Angels Agency of being nothing more than a giant scam.

“You already know this is a fucking scam,” @katie_kuick said.

One user even argued that Mongeau’s actions constituted human trafficking, while others referred to the model as a “pimp.”

“Babe please get an attorney with an inkling of awareness about anti-trafficking legislation because according to SESTA/FOSTA this is criminal exploitation,” @CloisterFuck alleged.

Many also questioned how much Mongeau would earn as a result of the endeavor and whether she would take a percentage of her clients funds on OnlyFans.

“Oh yes, let’s create an agency to steal money from OF girls that are already struggling,” @bunnesplat said.

The website to sign up for the new mentorship program does not include any details on the cost, but instead asks users to apply by providing their personal information.

Mongeau claims that as of Monday morning, more than 100,000 people have applied to be part of her new agency.

We’ve reached out to Unruly Agency.