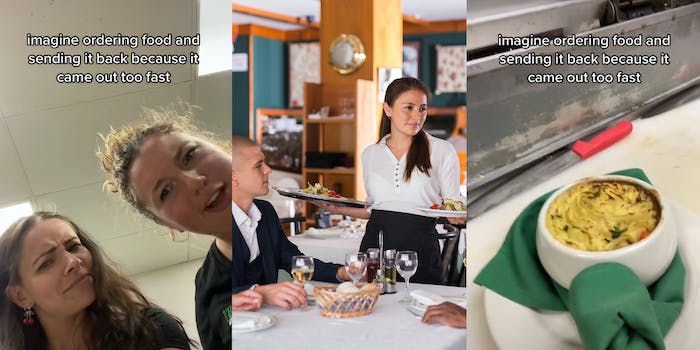 ‘You’re mad because you got your food hot and fresh???’: Server says customers sent back their food because it came out too quickly

'Then they were mad it was cold.'

In a viral TikTok video, a server claims a table sent back their food because it came out too quickly—when most customers usually have an issue with the opposite.

“Imagine ordering food and then sending it back because it came out too fast,” the text overlay reads.

The server, Rachel (@racheldont), records herself and a co-worker explaining the confusing experience. Her video received over 261,000 views as of Sunday.

“So, this table ordered their food, but they said they’d take it after our drinks come. So, I let their drinks come and I waited 10 minutes,” Rachel explains.

However, when her co-worker brought out their food, the customers claimed they didn’t order, she says.

“Then whose food is this,” the text overlay reads as the pair makes confused faces.

Rachel then says the table claimed they wanted their food after their second round of drinks.

“Well, you didn’t say that,” Rachel says in the video, expressing her frustration. “You told me that you wanted them after your drinks. So I waited 10 minutes after you got your drinks and were drinking them, and then it came out.”

The TikToker adds that they’re trying to reheat the customers’ food since they wanted to wait longer.

In the comments, many viewers empathized with Rachel and shared similar experiences.

“Bro I had someone make me hold their food till they finished their drinks. Then were mad it was cold,” one person stated.

“I remember this happened to me once as a server i was sooooo confused,” a second wrote.

“I’ve had someone make like a huge deal about that so ridiculous like I’m sorry you’re mad because you got your food hot and fresh???” a third said.

“I had regulars that always wanted their entree brought out when they were “3/4 of the way done with their salad” and got mad if it was done too soon,” a fourth shared.

Others got angry with the customers Rachel had to deal with themselves.

“It baffles me how ppl get so mad at you for not knowing information that they didn’t tell you,” one person said.

“I just had a flash of pure anger like I was the one dealing with them lmao,’ another wrote.

The Daily Dot reached out to Rachel via TikTok comment.