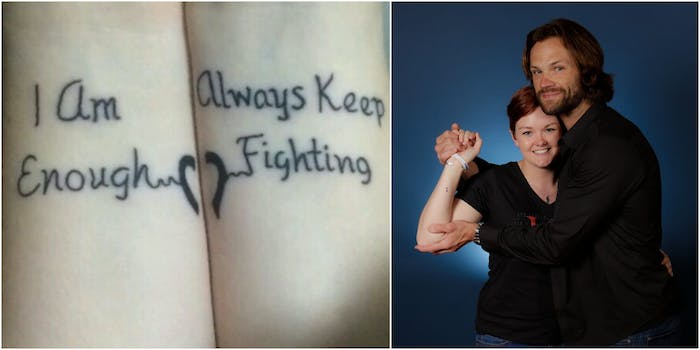 How a TV show's fandom is helping each other to 'always keep fighting.'

In 2014, Samantha Williams found herself living in her minivan with nothing to fill the silence except the voices of men hunting the supernatural.

Earlier that year, Williams had moved to Oklahoma from Houston to escape an abusive relationship with her father and in hopes of starting over anew. Instead, she found herself living on the street—and sleeping in her car—for the first time.

“That’s when my friend told me about Supernatural and gave me her Netflix account,” she said. “I binge-watched Supernatural every night. It kept me calm and I wasn’t scared to stay by myself in my minivan.”

On Sept. 14, 2014, Williams moved to Alabama to live with her aunt. Life grew more stable, but the then-46-year-old said her uneasiness didn’t subside because she was bullied by her boss at her new job and felt like the loved ones around her didn’t understand what she was struggling with.

“One day, I was going to go home and just end it,” she said.

But when Williams returned home from work that evening, she was greeted by a T-shirt she forgotten she had ordered from a suicide awareness campaign founded by Jared Padalecki, the actor who plays Sam Winchester in CW’s Supernatural.

“I started crying and knew it was a symbol,” she said. “That was someone or something telling me to stay alive.”

Williams is one of the thousands of fans who not only found solace in Padalecki’s original mental health awareness campaigns but arrived in droves to Supernatural conventions throughout 2015 to thank the TV star and share their stories.

It was these fans who inspired the latest initiative founded by Supernatural stars Padalecki, Misha Collins, and Jensen Ackles. It’s  called the Family Crisis Support Network, a “community support system that individuals can turn to, to support or help those suffering from mental health issues,” according to its website.

Collins—who was unavailable for comment for this story—told Entertainment Weekly in 2016, when the network was still in its crowdfunding stage, that the actors were inspired to start it because of testimonies they heard from fans.

“We have occasion to meet thousands and thousands of Supernatural fans and at every event, every one of us encounters as many as a dozen people who share really heart-rending stories about self-harm or addiction or depression or suicide attempts,” Collins said. “We see a lot of people with tattoos of semicolons on themselves—the semicolon is where the author could’ve chosen to end a sentence but instead chose to carry it on so it’s a very potent symbol for somebody who’s struggled with near-death situations and forged on.”

Williams attended a Supernatural convention in Tennessee that year and shared with Padalecki the story of how his campaign T-shirt saved her life.

Now, at just 14 months old, the network hopes of facilitate these tough conversations that seem to happen within the fandom daily.

“For whatever reason, it seems to be something that is prevalent, or at least bubbles to the surface in our fandom,” Collins to EW. “But if you are part of a community and you know that that community is offering help in a certain way and it’s something that you know is there, I think it might be really helpful.”

While it may seem odd that thousands of individuals grappling with mental illnesses such as anxiety and depression have found solace in a 12 series-old horror TV series, fans—including 34-year-old Ashley Romans in Seattle—say the connection is clear.

“The show is about family and it’s about heart. There are different kinds of love in it, and it’s mostly about not only surviving but supporting each other,” Romans said. “I have a mental illness myself and you have to survive it every day. I say survive—rather than fight or struggle—because I think that’s a lot what the show is like; in every episode, they’re surviving something bad but they have each other.”

The support network—which exists under the umbrella of Collins’ non-profit Random Acts—uses partnerships with To Write Love On Her Arms, IMAlive, and Pop Culture Hero Coalition, to provide training opportunities for volunteers who wish to be crisis responders and immediate access to support lifelines for individuals in crisis. It will soon also offer training programs for those affected by cyberbullying.

Alyx Ellsaesser, a 24-year-old in Alabama, is one of the young fans who showed the actors a semicolon tattoo at a convention. She said she put in an application to become a volunteer for the Family Crisis Support Network as a way to “pay it forward.”

Ellsaesser suffered from depression long before she found the Supernatural fandom and attempted to take her own life in high school. She said she never told anyone until Padalecki went public with his own mental health and founded the Always Keep Fighting campaign.

“He made me more comfortable in recognizing the fact that I’m not suffering, I am conquering and I have to conquer every day,” she said.

The tight-knit Supernatural community has thrived on the internet ever since the show debuted in 2005. Even though the internet is consistently criticized for enabling cyberbullying and toxicity, fans of the TV show—whose home base remains on Tumblr even as the community has spread throughout Twitter, Facebook, and Instagram—said social media has actually connected fans across the world to come together and support one another.

“It’s an unspoken rule on Tumblr that if you ever see a post with crisis hotline numbers or websites, you reblog it,” said Tessa Reeder, an 18-year-old fan in Tennessee. “It doesn’t matter what your blog theme is. You could potentially save someone’s life with your reblog.”

Ellsaesser echoed that sentiment, adding that she likes how easy it is to just follow Random Acts, the privately organized charity founded by Collins, on Twitter and Facebook to share their posts to her followers daily.

“It’s that seven degrees of separation,” she said. “You can access the world in five minutes if you have people share it out. Social media has played a big part in helping me get comfortable with reaching out to others.”

After meeting Padalecki a few times and with a giant support group on Tumblr and Facebook, Williams said she didn’t think she would ever need to call the Family Crisis Support Network. But as anyone who suffers from a mental illness knows, there are good days and bad days.

And Williams had an extra bad day recently.

“Things were starting to sneak up on me and was trying to take over and I just couldn’t control it,” she said. “I didn’t think I would need the foundation. But when things started crumbling down, I remembered it.”

With the encouragement of other Supernatural fans on Tumblr, Williams called the network’s hotline and received assistance from a fellow fan.

“She told me there were people there supporting me, even if no one else was. She even said, ‘If I have to be on the phone with you all night I will be,’” she said. “That’s what I thought was pretty amazing.”

Reeder said her friends who have also contacted the network were drawn to it because it offers the option to text a volunteer, rather than call.

“I think the greatest impact was that my friend now has somewhere to turn to when she needs help,” Reeder said.  “I also find it very helpful for myself because I don’t normally have anyone to turn to when things get bad. I have my friends on Tumblr, but sometimes it’s nice to know that there’s someone out there who will listen.”

Stories like Williams’, Ellsaesser’s, Reeder’s, and Romans’ aren’t hard to find within the fandom’s network on Tumblr—and they come from all over the world.

Pennsylvanian Taylor Birmingham found solace in the fandom and through Padalecki’s campaigns after her best friend committed suicide in 2015.

Ambre Gibert, from France, said she’s watched the show since she was a child and texts friends from the fandom who suffer from a mental illness to check in on them daily.

Canadian Samantha Mitchell said the TV show and its fandom has helped her come to terms with an abusive childhood and allowed her to move forward in life.

Beca Marques, from Brazil, said Padalecki’s transparency about his struggles inspired her to go to therapy and open up about her suicidal tendencies.

The testimonies go on, endlessly.

Williams said whenever she has a particularly difficult day she remembers the promise she made with Padalecki. That, along with the support system she has found within the fandom, keeps her moving forward.

“I don’t want to ever break that promise. Even though I’ve come close to it, it’s still scary to think that they’ll be mad at me because I broke a promise,” she said. “I never break a promise. That’s how they have helped me get over a lot of things, even though I still struggle every single day.”