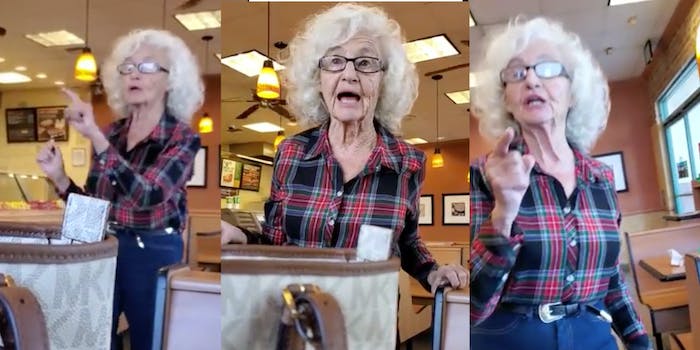 An elderly ‘Subway Karen’ accuses young girl of being a hacker. She was just watching a YouTube video

'You have no right hacking into my phone,' the elderly woman says in the video.

The young woman started filming the interaction after the older woman accosted her once. She told a security guard the older woman confronted her and told her she was “an idiot” for being on her phone and “going to jail” for the alleged “hacking.”

“You have no right hacking into my phone,” the older woman says in the video. “I have a nice, big iPhone too. I’m not behind on technology. You need to straighten your act up. Don’t come in and try to hack for things, for one thing, and you couldn’t get my account young lady.”

A Subway employee tells the young woman the older woman is “always like that,” insinuating they’ve had problems with her before.

The young woman who was accused of hacking tries to de-escalate the situation by saying “it’s fine.” But when the security guard escorts the older woman out, she claims she was being “targeted.”

The older woman left Subway after that confrontation.

The video circulated heavily on Reddit, with commenters weighing in on the situation.

“Imagine coming up to a random a** person trying to eat their foot-long and you say ‘YOU’RE HACKING!’ I have no words right now…” one Reddit user said.

But some users worried the older woman had dementia because of her age and “paranoia.”

“I’ve had two relatives go through Alzheimer’s and they can get downright nasty when they’re having one of their persecution episodes. They’re basically prisoners to these delusions induced by their own powerlessness over the disease,” another redditor said. “My guess is this lady probably has no one to take care of her, possibly no official treatment/diagnosis, or she can’t afford to be dependent on someone else.”

“This poor woman has dementia,” another added. “She is confused and paranoid and probably saw something on TV about hacking [… Let’s] not confuse being a jerk Karen with someone with dementia.”

Many who think the woman is suffering from mental health issues had a problem that she was considered a “Karen” to begin with.

“It’s become so annoying that [every] woman is now a Karen. It used to mean the entitled ‘can I speak to your manager’ types. Not meth heads and the mentally ill,” one user said.

Although many viewers thought the elderly woman might have dementia, it is impossible to tell from a video. You can watch the full video here.