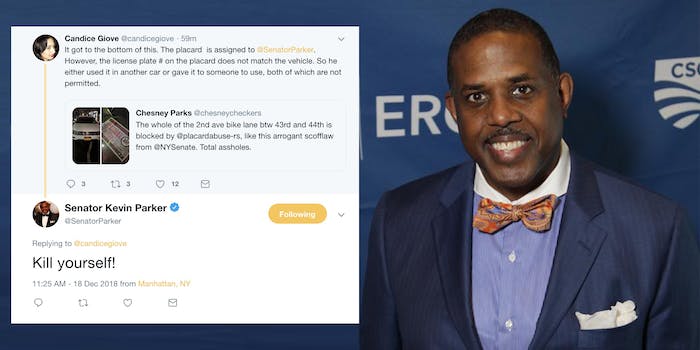 This was after she called him out for misusing a parking placard.

New York state Sen. Kevin Parker (D-Brooklyn) has apologized after tweeting “Kill Yourself!” in a response to a staffer who exposed him for illegally using a parking placard.

The tweet exchange took place Tuesday morning, after Twitter user Chesney Parks posted photos of a government placard on a car that was parked in a bike lane last week.

The placard noted the vehicle was “on official business” and had a stamp of New York state on it.

Candice Giove, the deputy communications director, NYS Senate Majority, tweeted this morning that she “got to the bottom of this.”

“The placard is assigned to @SenatorParker,” she wrote. “However, the license plate # on the placard does not match the vehicle. So he either used it in another car or gave it to someone to use, both of which are not permitted.”

Parker’s response: “Kill yourself!” The tweet was quickly deleted but a screenshot of it was shared by USA Today journalist Jon Campbell, setting off reactions online.

Parker apologized after Giove retweeted the original post. “I used a poor choice of words,” he wrote. “Suicide is a serious thing and and [sic] should not be made light of.”

I sincerely apologize. I used a poor choice of words. Suicide is a serious thing and and should not be made light of.

People did not think the apology went far enough, though, considering his reaction was over being called out for an infraction he has yet to cop to.

This isn’t Parker’s first troubling outburst. The New York Times noted Parker’s “toxic anger” in 2010; he has been previously charged with punching a traffic enforcement agent, and in a separate incident, assaulting a New York Post photographer. A Senate staffer also said he verbally and physically assaulted her, stomping on her glasses, in 2008.

Neither Giove nor Parker’s office responded to the Daily Dot’s request for comment.