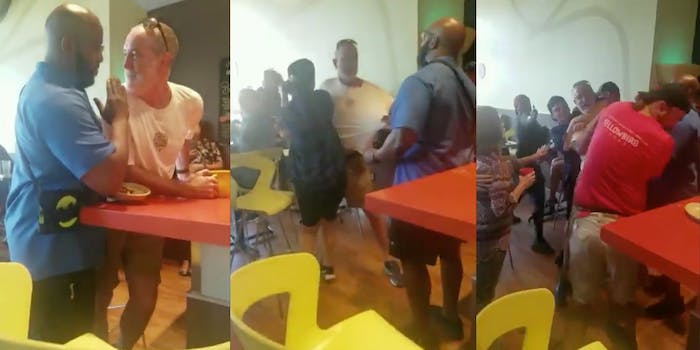 He also allegedly threw coffee at another employee.

A 30-second video showing a man assaulting multiple people in a Texas eatery is going viral after being shared on social media.

Though it’s not immediately clear where the video originated, @davenewworld_2 reposted it to Twitter on Tuesday morning, alleging that the incident happened at Snooze in Austin.

The short clip starts off with a white man standing at the counter arguing with a Black man over something indecipherable. The white man then throws the contents of his mug at someone behind the counter off-screen before getting into a tussle with the Black man as well as another customer who steps in to help.

Both try to calm him down, but he only gets more aggressive, yelling that he is being assaulted and appearing to yell the N-word at one point.

Despite attempts to restrain him, he eventually bashes a nearby employee in the head with his mug.

“I didn’t mean to hit you that hard,” he says as the video ends.

When reached for comment, one of the three Austin-based Snooze locations told the Daily Dot that all of the chain’s restaurants in town require staff to wear masks and operate with Centers for Disease Control and Prevention (CDC) social distancing guidelines. A Snooze employee tells the Daily Dot they were not aware of the incident and given the video’s lack of masks, that it’s unlikely this video is recent.

Multiple viewers commented on how calm the people trying to restrain the hot-headed man remained throughout the altercation.

“They treated him with too much respect!” @thegoodfello tweeted.

Someone else jokingly asked where “the Bath and Body Works employees are when you need them,” referencing the recent viral video that showed store employees full-on brawling with two customers that got out of control.

No one in the video appears to be wearing a mask, leaving people to wonder whether the video was taken recently or not. The mask mandate in Texas will officially be lifted this coming week, although some places have reportedly already stopped enforcing it.