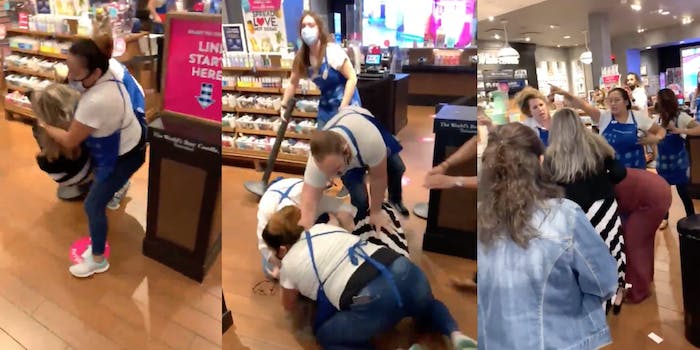 The video starts with several employees wrestling a woman to the ground.

Bath & Body Works employees were filmed brawling with customers after a dispute erupted this weekend inside one of their stores.

The footage, posted to Twitter on Saturday, begins with total chaos as several employees can be seen wrestling another woman to the ground at the Scottsdale Fashion Square Mall in Arizona.

The Twitter user who witnessed the fight, @gendenslow, says the incident began after one female customer accused another of standing too close to her.

Although the female customer does not appear to be wearing a mask, it remains unclear if that was also a factor in the fight.

As the argument escalated, Bath & Body Works employees reportedly tried to deescalate the situation, to no avail. The fight started shortly after the female customer began shoving employees and refusing to leave the store.

At one point during the video, a young woman who appears to be the daughter of the woman fighting with employees on the ground can be seen joining in as well.

A male employee can also be seen repeatedly shoving the woman in an attempt to get her to leave the store.

Users online immediately began taking sides, with many accusing the female customer of being in the wrong.

“I know absolutely no context but i’m firmly on the bath and body works employee’s side,” @zoeee_mama said.

But others argued that the employees were in the wrong for getting physical with customers.

“They deserve to be terminated, this is awful and not something employees should do,” @JimmyFantage said. “The employees did attack her first.”

But most users opted instead to poke fun at the absurdity of the video without taking sides.

“Went to Bath and Body Works and now their back and body hurts,” @Bookerc94 quipped.

It currently remains unclear what happened after the female customer left the store or if police ever responded to the incident.