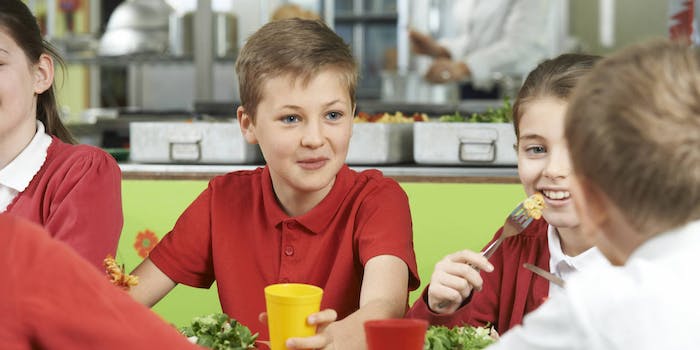 Middle schoolers may never have to eat lunch alone again, thanks to this app

If technology can make tweens less judgmental, we have a few more app ideas.

You could not pay me enough money to return to seventh grade. Middle school is a hellhole of judgy tweens, embarrassing gym uniforms, and that one history teacher who always stared down girls’ shirts. The worst part is everyone is ready to divide up along whatever imaginary lines they deem important—race, class, sexual experience, Tae Bo talent (trust us)—and publicly exclude whoever doesn’t belong.

Teenager Natalie Hampton experienced this in middle school after numerous days of eating lunch alone. So, because it’s 2016, she created an app to solve the problem. The Sit With Us app matches kids with other kids in their school for lunch, so nobody has to eat alone. Sit With Us is also trying to set up ambassador programs at different schools, so you’re not left with being the only kid trying to use an app to find friends on top of eating alone.

The Daily Dot hasn’t heard back from our request for comment from Sit With Us, but in the meantime, we realized apps could have solved a lot of middle school problems. So we came up with a few more that could help. If any tech entrepreneurs wanted to get on these ideas, then transport back in time to 1997, that’d be great.

• An app that lets you know who has tampons you can borrow discreetly.

• An app that lets you know who has pads you can borrow discreetly and reminds you it’s OK to still be afraid of tampons.

• An app that lets you know when the cool girls are in the bathroom so you don’t walk in on them talking about you.

• An app that warns you the clique you’re hanging out with are sort of jerks.

• An app that let’s you sit alone in peace for lunch but makes other people think it’s because you’re super cool and mysterious.

• An app that explains fractions better than your teacher.

• An app that causes a distraction at the winter dance so nobody sees you vomiting up a cafeteria hot dog in the trash can.

No, I had a fine time in middle school, why do you ask?