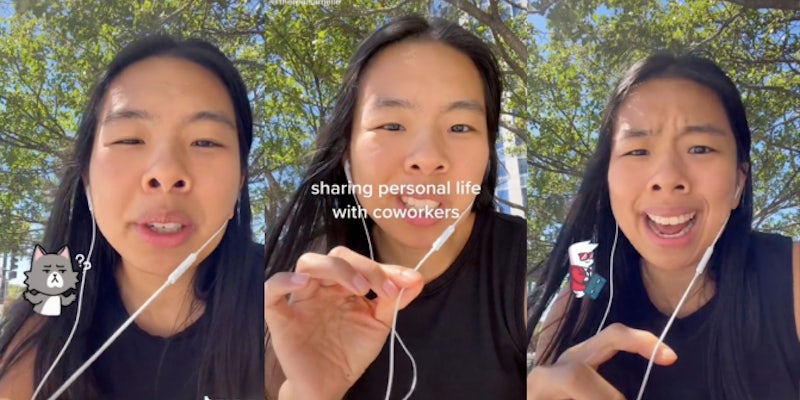 ‘Mine just know when I’m going on my annual leave because that’s all they need to know’: Worker asks how much of your personal life should you share with co-workers, sparking debate

'There are those that will throw you under the bus without hesitation.'

In a viral TikTok video, a woman asks how much of your personal life should you share with co-workers.

The video features user Sam Elle (@therealsamelle) as she asks the question, “how much of your personal life are you supposed to share with your co-workers?” She points out how she spends the most time with her co-workers throughout the week yet they know the least about her.

The TikTok has been viewed over 53,000 times as of Wednesday. A debate sparked in the comments, some agreeing to keep sharing personal information to a minimum.

“I keep it super minimal. Just enough for small talk,” one user said,

“Learned this lesson the hard way. Most of them aren’t your friends. Share minimal amounts,” a second user recommended.

“Say none of it. they can use it against you one day,” another agreed.

“Sharing less these days… it becomes a subject of gossip somewhere else,” one wrote.

Other users disagreed, saying they don’t see an issue with sharing your personal life at work.

“It’s a personal decision but my boss and I are actually best friends and text all the time,” one person shared.

“I straight up overshare about everything, but at least it keeps me and them entertained,” a second person stated.

“I literally have no filter they know everything,” another commented.

“Okay I have one co worker she tells me her life story I kinda tell her mine. I’ve known her forever. Anyone else nope, no information from me,” one wrote.

Workplace etiquette has become a topic of discussion recently. This month, a former human sources manager named Jade urged people to not befriend co-workers and managers. She stated the best thing to do is, “go into work, do what you gotta do, get paid, go home.”

Another TikToker named Emily went viral, emphasizing the need to make small talk. She explained that if you don’t, you’ll be perceived as “rude,” especially to important people. Emily stressed to engage in small talk with people in higher positions if you want to move up the corporate ladder.