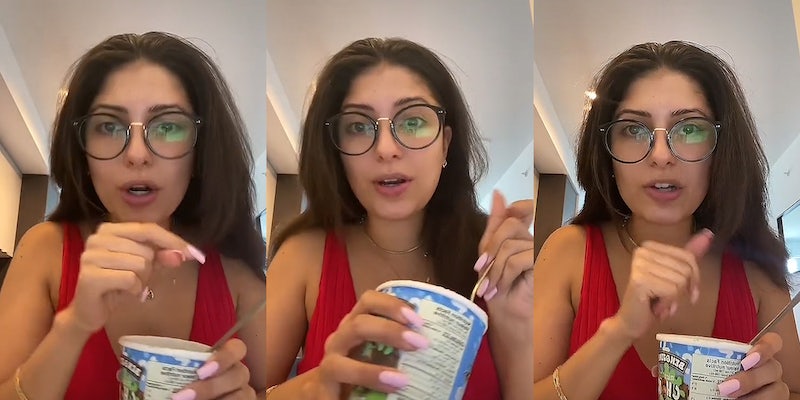 ‘GeT uP To AnYThiNg FuN ThIS WeEkEnd??’: Job recruiter says small talk at work is very important, sparking debate

'Oftentimes, much of the networking started with simple small talk before meetings or in the office.'

A tech worker and career content creator went viral on TikTok after highlighting the importance of making small talk in the office, sparking debate among reluctant viewers in the comments.

The video features the TikToker Emily Durham (@emily.the.recruiter) eating a small tub of ice cream as she gives career advice. “There’s literally nothing that will make you more hated in an office or corporate environment than skipping small talk,” she says.

Durham urges viewers to engage in small talk with their coworkers—especially those in charge of promotions—because otherwise, their coworkers may think they’re rude. Durham says refusing to partake in conversations about the weather or how their weekend was with a particular coworker lead one to be passed up for a promotion.

“You’re probably not rude,” she notes. “You’re probably just someone who likes to skip the bullshit. But if Suzie’s in charge of promotions and she thinks you’re an asshole? You’re gonna wish you asked her how Timmy’s birthday was.”

The TikToker worked in finance for four years and currently works in technology, where she’s been for three years. She explained to the Daily Dot how she came to understand the importance of small talk from networking at her previous job.

“I’ve personally found the power of networking to be instrumental in my career, especially when I worked in finance,” she said via text message. “Oftentimes, much of the networking started with simple small talk before meetings or in the office.”

Durham added that putting more effort into casual conversations can lead employers and coworkers to have a more positive view of employees.

“I’ve often seen and heard of folks being seen as more warm and welcoming when they welcome small talk and seen as less friendly when they don’t,” she says. “Many studies show us that being ‘likable’ is one of the core skills employers look for—and often time this form of connection is part of that.”

However, the creator added that it all depends on the job. Small talk can be an indicator of a company’s culture.

“I think this is where it’s important for everyone to be mindful of the kinds of companies they want to work for,” Durham continued. “At some companies that are more political, having the small talk is critical to your growth. My hope is for videos like this to encourage jobseekers to be picky about the company cultures they are willing to accept, and hopefully offer some tips to help them navigate complex working situations.”

Her video has been viewed over 323,000 times since it was shared Wednesday. Several users said small talk is the exact reason they left the office—either for a different type of workplace or for a remote job.

“This is why I hated working in an office,” a second agreed.

“Yep. That’s why I’m about to work from home,” a third commented.

Others noted that small talk can be exhausting at work, especially when it feels forced.

“It’s so draining small talking though,” one viewer wrote.

“Nothing annoys me more than people asking me how I’m doing, etc and then asking me a question,” another added.

“I’m there to work & get a check; not make friends,” a third stated.

One user shared their personal small talk pet peeve. “My biggest pet peeve is when people ask what you have planned for vacation. Like NOT BEING HERE BYE,” they said.

Another viewer argued that small talk itself isn’t the problem, rather the people are. “Thats why it’s important to work with ppl you like lol,” they said.