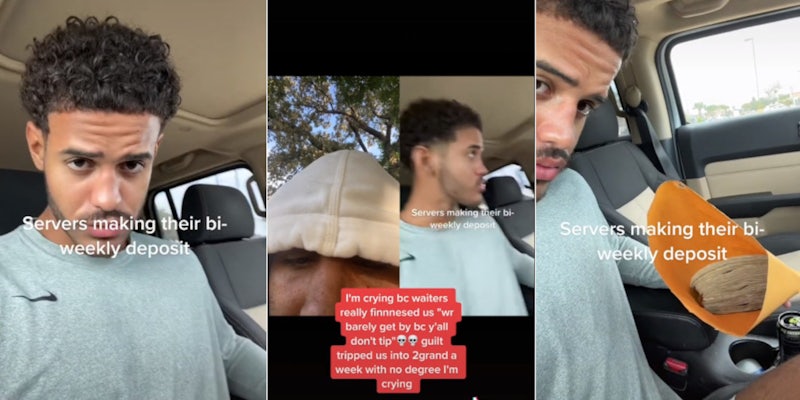 'Guilt-tripped us into 2 grand a week.'

How much do servers make? While this may seem like a simple question, the reality is a bit more complicated.

The U.S. Bureau of Labor Statistics stated that the median income for tipped workers across the country in 2021 was $12.50 per hour, meaning the median server made around $26,000 if they were working 40 hours per week.

However, tipped wages are notoriously underreported. A 2015 article in the Atlantic noted that “the IRS estimates that as much as 40 percent of tips go unreported,” meaning that “as much as $11 billion” in income is unreported annually.

Because of this, different sources offer conflicting information about how much servers truly make. Career site Zippia puts the average hourly rate for a server at $12.91, while Indeed claims that the average base hourly pay for a server is $15.87 with an additional $100 in tips daily.

It should also be noted that the tipped minimum wage is different from non-tipped labor in the United States. While the federal government ensures non-tipped workers are paid at least $7.25 hourly, tipped workers have a minimum wage of just $2.13 per hour, though employers must make up the difference if their tips do not bring them up to the $7.25 per hour average. Both of these minimum wages may also vary from state to state and city to city.

Given this complicated web of claims and laws, it’s easy to see why users online are fascinated by the idea of server pay.

One video on the topic recently went viral, racking up over 2.1 million views after being posted on TikTok. In the video, user and server Ason (@asonpauly) shows an envelope full of cash. In this video, he says that this is simply one “bi-weekly” deposit.

The video was later duetted by user @jahn117, prompting further discussion. “I’m crying because waiters really finessed us,” @jahn117 said in his duet. “Guilt-tripped us into 2 grand a week.”

At first, some users claimed this video put them off tipping.

“One minute they yelling at you to tip cause they underpaid next minute they making 25k in a month,” wrote one user.

“YEP Not tipping for the next MONTH,” added another.

“My bf been saying his aunt was able to take care of three kids and all rent and utitilies off just tips,” shared a third. “Bruh theres a reason they don’t quit.”

However, some offered a different perspective on working at a tipped job.

“As someone w a tip based job i hope yall know at LEAST half of those bills are ones,” claimed a commenter.

“At my last serving job we had to split the cash tips and ppl rarely tipped in cash, mostly cards,” an additional TikToker recalled. “i can not fathom making that much cash.”

“As a hostess at a not very busy restaurant, servers have to deal with a lot and his experience definitely does not speak for everyone,” said a fourth.