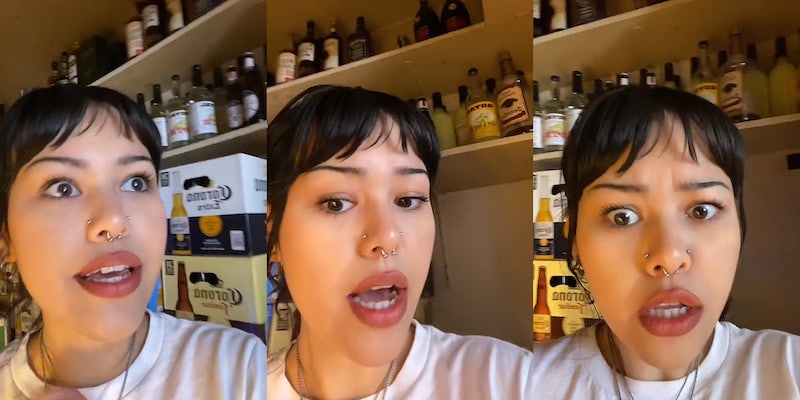 ‘What future? Because as far as I’m concerned, this planet is dying’: Server calls out customers who question her going to art school

'You should ask them what they went to school for.'

A server on TikTok is going viral for calling out older customers who’ve tried to “logic bully” her into pursuing a career path that she doesn’t love just so she can make a living. Viewers who saw her post echoed her sentiments, expressing a clear disdain for getting into conversations with complete strangers about their career paths.

"I literally hate it when I'm serving and then these old people will be like, 'Oh are you a waitress full time or like are you still in school?'" Melissa explains. "I'm like, I'm still in school. 'Oh what do you, what do you study?' I'm studying art."

At this point in the video, she drops a glass and spills water, before the clip cuts to her speaking Spanish directly into the camera.

"But then they get all flustered," she continues, "'What are you going to do with that? You cannot do anything with that like, Art, you need to think about your future!' And it's like...what future? Because as far as I'm concerned, this planet is dying. It's like, you're just jealous. You're jealous of me because I can still experience childlike wonder...like let me color. What's the harm in that. I didn't know coloring was a crime."

USA Today published a report that appears to reject the notion that the majority of artists are starving ones and pulled in figures from employment sites to drive that point home.

"Recent research shows that 80% of art graduates obtain employment that is either closely or somewhat related to their education," the study reads. "An art degree gives you the ability to earn good money while doing work you have passion for - a feeling sadly missing in much of the modern workforce."

For the most part, viewers of Melissa's video were exasperated that she had to hear customer's commentary on her life goals.

"I don’t get why people think art won’t take them anywhere do they not know who Van Gogh is ?" one user said.

"You should ask them what they went to school for damn idk why they’re acting like they lay your tuition smh," a third added.

Others said that judgments from customers manifest in other ways as well.

"'Oh I go to community college.' And immediately they hit me with the 'Oh nothing wrong with that.' Excuse me? When did I say there was something wrong," one user shared.

"Lol I’m going to school for graphic design and when I tell people they look at me like that’s not a real job," another said.

It's becoming more and more apparent that going after a career you love and are passionate about is probably a safer choice than not. Although pursuing college degrees in America is more expensive than virtually every other country in the world, that doesn't necessarily mean folks are getting the most bang for the buck in terms of student services or even the best education for their money when compared to schools in other parts of the world.

As far as Melissa's statement that the "planet is dying," there are conflicting reports published years apart as to how dire of a threat climate change is to mother nature's survival and our own. A 2014 Science.org article stated that "Earth won't die as soon as thought." However, a Livescience report in 2021 directly contradicts that. "The planet is dying faster than we thought...A triple-threat of climate change, biodiversity loss and overpopulation is bearing down on Earth," it reads.

The Daily Dot has reached out to Melissa via her website's email form for further comment.

We crawl the web so you don't have to.
Sign up for the Daily Dot newsletter to get the best and worst of the internet in your inbox every day.
Let me read it first
Share this article