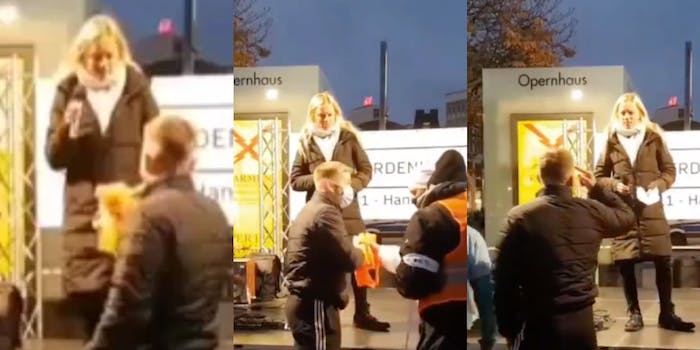 'I'm not going to be a security guard for this kind of idiocy.'

A shocking viral video from a protest against coronavirus lockdowns in Germany shows a security guard confronting a speaker who compared herself to a homegrown Nazi resistance fighter, Sophie Scholl.

As she spoke, a security guard advanced the stage and said her comments “trivialized” the Holocaust.

“I’m not going to be a security guard for this kind of idiocy,” he said, with his designated security vest in hand.

The guard was escorted away by police, and the upset protester threw down the mic and stormed offstage soon afterward.

A member of the White Rose non-violence movement, the renowned Scholl was a student and anti-Nazi activist. After having been discovered circulating anti-war leaflets at the University of Munich with her brother, Hans, she was convicted of high treason and was executed by guillotine.

At least a dozen others, including her brother, would be beheaded.

When considering Scholl’s sacrifices in the face of real, state-sanctioned violence and oppression, the woman’s comparison indeed rang frivolous and wildly disrespectful to millions of those who suffered under Nazi rule. The broader comparison of COVID lockdowns to Nazism rings even more ridiculous, virulently anti-Semitic, and short-sighted in terms of each event’s scope and depth.

As Petschilol commented: “When he points her out, she responds, ‘What did I say?’ As if she forgot she compared herself to a girl that got decapitated by the Nazis at age 21, while all she is doing is just blathering nonsense in front of some idiots.”

To close the thread Miller-Idriss wrote: “Long story short, rampant comparisons by COVID shutdown/mark protesters to slavery or themselves to Nazi resisters are a clear sign of how unhinged from reality these people are, this ex. shows how global the phenomenon is.”

“Combatting misinformation & conspiracies about the virus or a vaccine is one thing. But fighting metaphors of resistance &oppression is equally important. Critical to call out these analogies for what they are: absurd, offensive, horrific. No sympathy pass for the blond woman with audible tears on stage after a heroic security guard rightly calls her out for minimizing the Holocaust.”