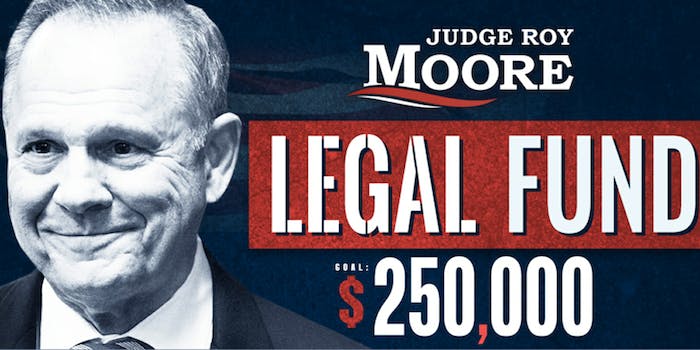 People paid him back with an awfully familiar phrase.

Former U.S. Senate candidate Roy Moore (R-Ala.) made a plea for help paying his legal fees—and the internet has nothing but “thoughts and prayers” to give him.

In a long Facebook post he published on Thursday, Moore thanked his supporters and pleaded for them to give to him once more to fight a “vicious attack” from lawyers in Washington D.C. and San Francisco who hired an Alabama firm to “ bring another legal action against [him] and ensure that [he] never fight again.” The lawsuit was brought by the Alabama woman who says he groped and kissed her when she was 14 and he was 32.

First, I wanted to write you to say thank you most sincerely for your support and prayers for my campaign for the U. S….

Posted by Stand with Judge Roy Moore on Thursday, March 1, 2018

Moore blamed everyone but himself for the messy legal situation he has found himself in—he still claims the accusations made against him were false. Instead, he told his supporters that the lawsuit is a culmination of a leftist anti-Christian agenda.

“The liberal media, in association with some who want to destroy our Country do not want my influence in the 2018 elections and are doing everything they can to stop me,” Moore said in the post. “Gays, lesbians, and transgenders have joined forces with those who believe in abortion, sodomy, and destruction of all that we hold dear. Unless we stand together we will lose our Country.”

Furthermore, Moore desperately wants his supporters to believe that by giving him money, they are helping fight the good Christian fight against all of the sin on earth.

“Christians can no longer afford to remain silent in these ‘perilous’ times,” Moore said. “For we know that in such time men shall become lovers of their own selves, covetous, boasters, proud, blasphemers, disobedient to parents, unthankful, unholy, without natural affection, truce breakers, false accusers, incontinent, fierce, despisers of those that are good, traitors, heady, high-minded, lovers of pleasure more than lovers of God. We must fight, an appeal to the God of Heaven is all that is left us!”

It didn’t take long for trolls to fill his Facebook post’s comments section.

“Why do you need money when thoughts and prayers should be enough?” one Facebook user asked. “And why can’t you just pull yourself up by your own bootstraps instead of begging for handouts like a socialist? After all, if you get to used to accepting welfare from others, won’t it just make you lazy?”

Even the LGBTQ community left him a note.

“We the gays have taken up a collection for you,” another Facebook user said. “As we are very powerful (we control earthquakes, viruses, tornadoes, etc) expect to be overwhelmed with the amount of thoughts and prayers we are sending. I am sure your attorneys will happily accept them—they can stop bullets, cure cancer, and influence elections. Best wishes!”

The jokes spilled over to Twitter, as well, and someone went as far as to write Moore a check that listed “thoughts and prayers” as the dollar amount.

Roy Moore is broke and literally begging for money on Facebook. Too bad he can't get a job at the mall. But maybe the NRA and KKK can give him all the thoughts and prayers he needs to make ends meet?

I hear Roy Moore is now broke and asking for money on Facebook. I'd advise him to get a part-time job at his local mall but…

You could do what Mr. Art Mofo did.
Send Roy Moore your thoughts and prayers. pic.twitter.com/8T72kGQvbD

All jokes aside, Moore still has a powerful base of supporters standing behind him. In just the two days his funding site has been promoted, he’s raised more than $32,000 of his $250,000 goal. All this for a man who already receives a $135,845 annual retirement allowance from the state of Alabama.