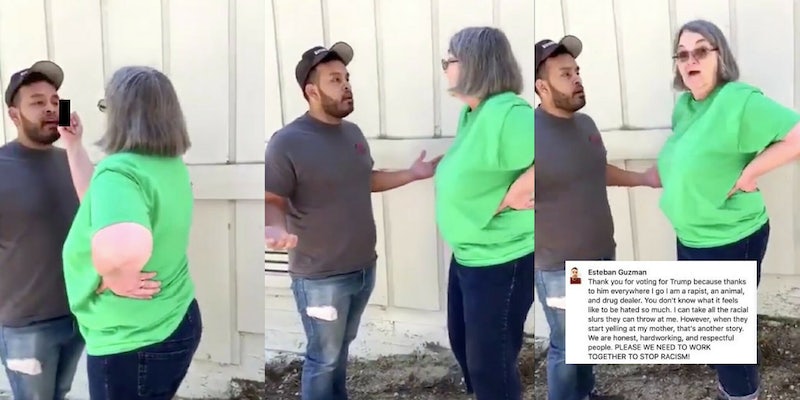 A woman evoking the anti-Mexican sentiments of President Donald Trump has been caught on camera telling a man and his mother that she hates them because they’re Mexican, and that they’re rapists and animals.

In the video, recorded in Pomona, California, and shared to Twitter by Kenidra R. Woods, a friend of the man targeted by the racist woman, Esteban Guzman, looks on as the woman, who is white, stands facing him, left hand on her hip, right middle finger stuck in front of Guzman’s face.

“Because you’re Mexicans,” she replies.

“Because we’re Mexicans?” she asks.

“Yeah, rapists, and animals,” she says after laughing.

“Rapists? How many people have I raped?” he asks her.

“How many, how many drugs have I dealt?” he asks her again.

“Even the president of the United States says you’re rapists,” she says.

A friend, Esteban Guzman sent me this video of a racist white woman harassing him while out working with his mom.

"Why do you hate us?"
"Because you're Mexicans."
"We are honest people right here!"
"Haha..yeah.. rapists & animals."

Guzman told Don Lemon on CNN that he works full time as an administrative assistant, and works as a landscaper on the weekends, taking no days off. He and his mother, who is a house cleaner, were at the home of a new client, who had asked him to work on the yard.

Guzman said he was inside the house while his mother was outside using a leaf blower when the incident began. He had heard the woman yelling at his mother, over the noise of the leaf blower, telling her “go back to Mexico.” That’s when Guzman came outside and stepped in, at which point his mother began recording the interaction.

The video continues with the woman refusing to back down from her accusations, even mocking Guzman’s mother when she begins speaking Spanish to him.

“Do you believe everything you see on the news?” he asks her.

“You see how we’re working hard here?” he asks.

“[Unintelligible] what you’re doing. You’re also blowing it in everybody else’s yard,” she says.

When Guzman’s mother tells him to tell the woman that she saw them finishing up the job, the woman makes blabbing noises with her mouth, mocking his mother’s use of Spanish.

The video ends with the woman wagging a finger at Guzman, telling him to “come here, little boy.” The woman has yet to be publicly identified.

Across Twitter, the video has received more than 77,000 likes, 48,000 retweets, and more than 4 million views. Many responded with support for Guzman and other immigrants.

I can't even imagine having the self-restraint this man has when faced with such hideous behaviour. His calm, reasoned and graceful response is tragically beautiful

So much of our country would not be functional without their labor.

There are 47 million legal American citizens that identify as Hispanic/Latino.

"These people" are American without caveat. We don't share America with "them"… We're American together.

Others have connected Trump’s words to the woman’s racist assertions. When Trump first announced his presidential candidacy in 2015, he said that Mexico wasn’t “sending” its best people, and that the Mexicans coming to the U.S. are rapists. Trump doubled down on this comment in April when speaking about the large Central American caravan coming to the U.S.-Mexico border, saying that migrant women and girls “are raped at levels that nobody has ever seen before.”

“And remember my opening remarks at Trump Tower when I opened. Everybody said, ‘Oh, he was so tough’ and I used the word rape,” Trump said regarding the migrant caravan. (It should be noted the president himself has been accused of sexual assault and harassment.) “And yesterday, it came out where this journey coming up, women are raped at levels that nobody has ever seen before. They don’t want to mention that. So we have to change our laws.”

I can't bring myself to watch this. It hurts too much to even read these words. This is what Donald Trump has normalized in America!! https://t.co/fiXnE49PAR

Don't try and tell me that trump hasn't give the green light to more overt racism in this counrty. They are now repeating the racist in chief verbatim https://t.co/9F68FGJ44m

Woods shared a comment from Guzman addressing people who voted for Trump, perhaps such as the woman who verbally attacked him in the viral video.

“Thank you for voting for Trump, because thanks to him everywhere I go I am a rapist, an animal, and drug dealer. You don’t know what it feels like to be hated so much,” Guzman wrote. “I can take all the racial slurs they throw at me. However, when they start yelling at my mother, that’s another story. We are honest, hardworking, and respectful people. PLEASE WE NEED TO WORK TOGETHER TO STOP RACISM!”

His message to people who voted for Trump: "We are honest, hardworking, and respectful people. PLEASE WE NEED TO WORK TOGETHER TO STOP RACISM!" No one should be made to feel less than. I am outraged for him. This is not okay 2/2 pic.twitter.com/pns4rkBc2K

Here's a picture of my friend Esteban Guzman, a college graduate. Despite what the racist white woman said — he's not a rapist, neither does he sell drugs. He's a hardworking man who truly inspires me.❤️ pic.twitter.com/F1e6dM3mhi

Guzman also shared the video to Facebook, but had it taken down for going against the social network’s “community standards.” Facebook later corrected its “mistake” and restored the video.

Facebook took down my video. I guess showing the world that racism still exists is "against their community standards." I will not be silenced because TOGETHER WE NEED TO STOP RACISM!

Facebook corrected their mistake of taking down my video. Now, lets move forward and #EndRacism !

“People look at me and they see what [Trump] said on TV, and that’s not true. That’s not true for any of us,” Guzman told Lemon.

On Twitter, Woods shared another message of Guzman’s thanking the internet for its support and reminding others to not “let the hate cloud your mind” and to “stay focused on why we are against racist, there is not need for violence.”

“I stand for all those voices that are not being heard. I stand for those that are afraid to speak up. I stand for the world because we need peace. Thank you! Keep in mind that I love all of you for standing with me,” he wrote.