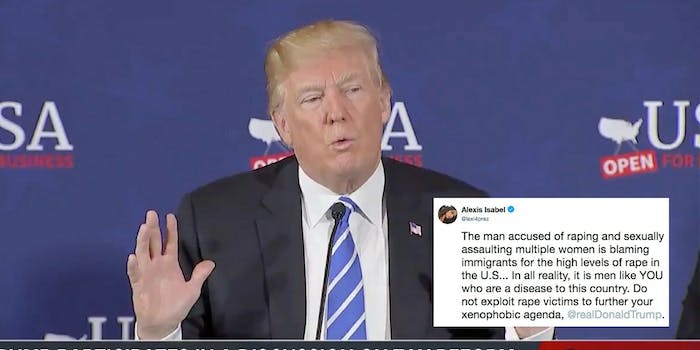 President Donald Trump, speaking at a roundtable on tax cuts in West Virginia on Thursday, tossed away his prepared remarks before saying that migrant women and girls coming to the U.S. “are raped at levels that nobody has ever seen before.”

Trump referenced a controversial remark he made in 2015 while announcing his presidential run, CNN reported. At the time, he was speaking about Mexicans and said outright, “they’re rapists.”

“And remember my opening remarks at Trump Tower when I opened. Everybody said, ‘Oh, he was so tough’ and I used the word rape,” said Trump, who himself has been accused of sexual assault and harassment, on Thursday. “And yesterday, it came out where this journey coming up, women are raped at levels that nobody has ever seen before. They don’t want to mention that. So we have to change our laws.”

"I used the word rape—and yesterday it came out where this journey coming up, women are raped at levels that nobody's ever seen before. They don't want to mention that." pic.twitter.com/ZLcJj7aiDl

Trump and conservative media outlets have for days been railing on a so-called “caravan,” aka a group of mostly migrant women and children traveling to the U.S. to flee violence in Central America.

The Washington Post reported Thursday that there are no verified reports of rape, nor of a rape epidemic taking place, surrounding the caravan.

“The only mentions of rape with regard to the caravan in recent days, in fact, refer to criminal behavior that the migrants have been trying to escape in their home countries or along the route,” according to the Post.

A BuzzFeed News reporter who has been traveling with the caravan also tweeted that he hasn’t seen or heard reports of people being raped.

To be clear I haven’t heard of anyone being raped in or around the caravan.