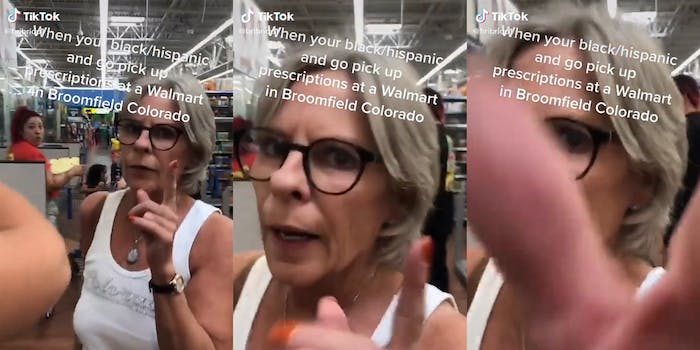 ‘Do you want to go to jail today?’: Sisters confront ‘Karen’ who cut line at Walmart pharmacy in viral TikTok

'Be a better person.'

A TikToker in Colorado has gone viral for documenting her interaction with a woman dubbed a “racist Karen” who allegedly cut her and her sister in line at a Walmart pharmacy. The 23-second video, posted Tuesday by user @bribriqp1, shows the older white woman reaching for the TikToker’s sister’s phone while saying that she is “two weeks out of surgery” and has a “24-inch incision.”

In addition to attempting to grab the sister’s phone, the “Karen” also allegedly pushed @bribriqp1, according to one of her comments.

“Do you want to go to jail today?” the TikToker’s sister asks after the older woman reaches for her phone. “You just assaulted me. You touched me.”

The video’s caption includes the tag “#racist,” and the on-screen text mentions that the sisters are “black/hispanic.” These seem to indicate that @bribriqp1 believes the incident was racially motivated, but the older woman did not make any racial remarks in the video, and @bribriqp1 did not mention any racial remarks being made before the video began.

It’s unclear what happened immediately before the video was taken, but @bribriqp1 explained the situation further in the caption and comments. In a pinned thread, she explains that the pharmacist called her and her sister to the counter, but the “Karen” went ahead instead.

After being taken care of, the older woman allegedly pressed her middle finger to her cheek while walking past the sisters, “trying to hide it like a kid,” the TikToker said. The TikToker said she looked to bystanders to confirm that they saw the insult and then gave “Karen” the middle finger in return. The older white woman came back to confront the sisters, which is when the video starts. The video is, apparently, “the end of the whole interaction.”

In response to comments claiming that the sisters “antagonized” the older women, @bribriqp1 stated the older woman approached them first. The video shows that the TikToker’s sister brought the phone closer to the older woman’s face before she attempted to grab it.

Later in the video, TikToker’s sister also follows the woman to a different check-out line while saying, “Be a better person.” She eventually rejoined @bribriqp1 in the check-out line where the incident began after the older woman told her to get away.

In the video, @bribriqp1’s sister asks the “Karen” if she wants to go viral. Whether she wanted to or not, she has. The video had received over 70,000 views, which may come as a shock to user @jojo_denver who commented that the people who make claims about going viral usually “have like 10 followers.” @Bribriqp1 had 285 followers as of Wednesday.

Some commenters asked for a second video or more information about the“Karen,” but the video remains the only one on @bribriqp1’s account, and she has not made any comments indicating that she will be making further videos.

Even without a series of follow-up “story time” videos, many users support @bribriqp1 and her sister and commended the way they behaved in the situation.

“I really need to learn from people like you,” user @selinahughes36 wrote. “You handled that so much better than I would have. I would have been the one getting arrested that day.”

Other users, though on the sisters’ side, were disappointed in how they handled the situation. They expected physical retaliation. Some even suggested using pepper spray, a sentiment that also came up in the comments of a “Karen” video shared by actor Michael Rapoport the same day.

“I would’ve mopped the floor with [Karen] if she touched me,” wrote user @sharebear98. @Bribriqp1 agreed, saying that she “would’ve knocked [Karen] out” if it was her phone rather than her sister’s that had been touched.

The TikToker wrote, however, that she refrained from violence because of her sister. She says her sister “knew that’s what they expected of us,” referring to the fact that the girls are women of color.

Despite @bribriqp1’s labeling of the woman as “racist,” several commenters believe that race was not a factor in the incident at all or that the video does not tell the full truth.

“[Race] has nothing to do with this,” user @greekgirlinmuchen wrote. “It’s a lady who thinks she can go around and do and say as she pleases.”

The Daily Dot reached out to user @bribriqp1 via TikTok and Walmart’s media relations department via email and did not immediately receive a response.