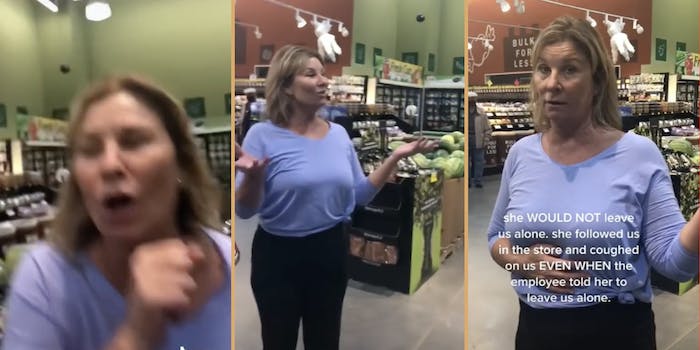 ‘We need to normalize pepper spray for these situations’: Karen coughs on mother, daughter in grocery store

In response to being called a Karen, the woman says, 'You're such sheep.'

Actor and internet personality Michael Rapoport shared an inflammatory TikTok video featuring a maskless Karen purposefully coughing on people at a grocery store, apparently to try to win an argument about mask-wearing.

The original version of the video appears to have come from a local TV station in Nebraska that said a Reddit user named Jessabird shared it with the station.

That person claimed the video provided documentation of a maskless Karen provoking the redditor and her daughter by coughing on them and then going into an argument about why she didn’t need to wear a mask. The incident took place at a Super Saver grocery store on 27th and Pine Lake in Lincoln, according to the KLKN-TV story on the incident.

The Reddit post was still up as of Tuesday evening, with u/Jessabird describing the incident in detail. “She went on about how she was born and raised here in Nebraska, and it’s too bad that some Nebraskans have turned into sheep. She asked if I’ve had a vaccine and said that my kid and I don’t need to wear masks because we look young and healthy. There were several other people around wearing masks but for some reason she chose to pick on me and my kid,” u/Jessabird said.

Rapoport’s posting of the video via his TikTok account has generated more than 3.4 million views so far.

The video starts with the unmasked woman saying, “Excuse me, I’m coming through” and then exaggeratedly coughing in the direction of the person filming the video.

The video then cuts to an exchange they have, in which the redditor appears to be telling an off-camera store employee that the woman coughed on her. In response to being called a Karen, the woman says, “Whatever; you’re such sheep.” Then, when the redditor asks the woman why she’s not wearing a mask, she says, “Because I don’t need to have one on. I’m not sick and neither are you.”

The woman then went on to argue that, “Two years ago, before everybody started talking about COVID, you were OK with that—going out not knowing if you were sick, right?” She also smiled while repeatedly saying, “I have allergies.”

Commenters came in hot on Rapoport’s post, with one suggesting, “Literally punch her in the face … why y’all standing there recording?”

Another opined, “We need to normalize pepper spray for these situations.”

A post about the incident, appearing to be from Jessabird on the r/Lincoln subreddit, was shared on Twitter by the Seeing Red Nebraska account on Twitter. It labels the store in question “the anti-masking free-for-all at Super Saver Foods, where the owner, city council member Jane Raybould, appears to not enforce the city mask mandate.”

That account then shared the video in the thread.

Though the video’s gone viral and captured something the redditor had to endure, she noted in an addendum to her Reddit post, “I don’t necessarily like how I handled this at the store. I should not have engaged with this lady once I knew what she really wanted to talk about. I was so shocked at her behavior that I could barely think of anything to say. I wish I would have instead just left and gone somewhere else to shop. It was not a fun or amusing experience. Rather it was bizarre and weird.”

She continued, “I understand some people don’t want to mask up but I’m not going around trying to argue with them. I mind my business and I expect others to mind theirs. Like I said above, I didn’t even notice at first that this lady wasn’t wearing a mask. But it’s a huge problem when a grown adult resorts to spewing their unmasked germs all over strangers in a public setting.”