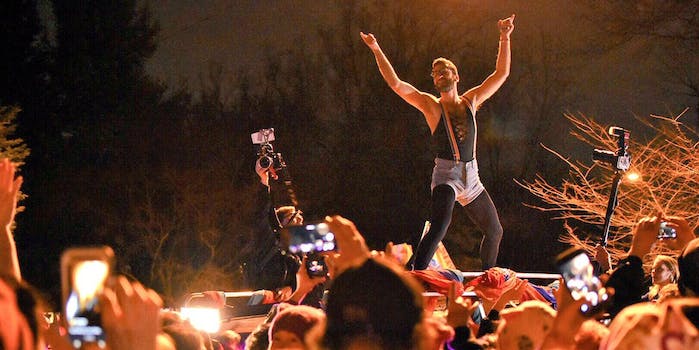 Protesting the night away.

Last night, an estimated 200 protesters turned out for a “Queer Dance Party” on the streets outside Pence’s temporary Washington D.C. home, shimmying the evening away to the tunes of Lady Gaga, Whitney Houston, and the Queen Bey herself.

"We are here / we are queer / we will dance" chants at #LGBTQ dance party outside Mike Pence's house on his last night living there pic.twitter.com/N4ZkQVF8qB

Founder of gay rights group WERK For Peace and protest organizer Firas Nasr told CNN that the group was there to turn the streets into their dance floor.

“We are here tonight to send a clear message to Daddy Pence that we will not tolerate bigotry and hate in our country,” Nasr told CNN, addressing Pence’s stance on LGBTQ protections and support of gay conversion therapy.

The protesters peacefully danced 1.2 miles from their starting point at the Friendship Heights Metro to Pence’s home, the walk taking about an hour.

Though Pence himself was actually hosting the Vice President-elect’s Inaugural Dinner at the National Portrait Gallery downtown, protesters set up their party half a block from Pence’s rental property, chanting “Daddy Pence, come dance.”

These are the streets outside Mike Pence's house in D.C., shut down by activists throwing a Queer Dance Party tonight. Pure jubilance. pic.twitter.com/GrJAgvSZBh

If this video of @werkforpeace organizer Firas Nasr leading the protest doesn't make you want to become a political organizer, nothing will. pic.twitter.com/tBHiRMOsa4

Pence’s house party is the second protest organized by WERK For Peace. Nasr founded the organization as a response to the Pulse nightclub shooting, and orchestrated a flash mob in Orlando in September as a call to action for Congress to address gun violence.