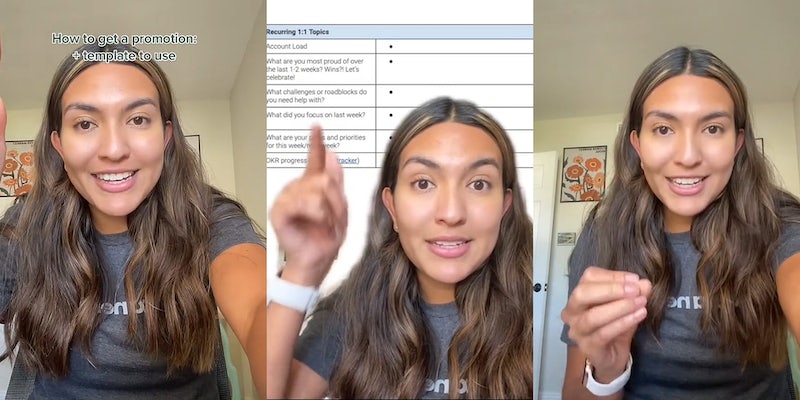 ‘Track your progress like your promotion depends on it’: Worker shares PSA for ‘corporate girlies’ about how to get a promotion using spreadsheet template

'I've done this for every internship and have always gotten a return offer!'

There are countless stories from working professionals online who say that they’ve been unjustly passed up for a promotion, sometimes losing out on advancement in the workplace to an external hire.

TikToker Daniela (@wfhdani) recently went viral after sharing an example of a sheet she uses weekly in order to build out her promotion packet to increase her chances of success.

While promotion processes vary from business to business, it’s generally believed that folks who invest time and energy into developing promotion packets for themselves highlighting their workplace accomplishments have a better shot at securing a higher place on the company ladder than those who do not.

If one is a high-achiever at work who handles a variety of different tasks, especially in dire moments, then you have a clear record of that. Plus, if one typically has a lot on their plate, it can be difficult to precisely catalog everything they do. A promotion packet demonstrates meticulousness on the employee’s part, showing that you can still provide valuable metrics while juggling your day-to-day operations, which would be a big talking point rooted in evidence while stating your case for a promotion.

@wfhdani #stitch with @acnugs watch the original creators video that goes more in depth of why you need to do this. #salary #wfh #tech #tech #greenscreen ♬ original sound – Work from home Dani

She posted the clip as a stitched response to fellow TikTok user @acnugs’ post, who says, “You need to keep a log of every single thing you have done” on the job.

Daniela adds to the creator’s sentiment, noting that it’s helpful for promotions. “You need to track every accomplishment, any other side project that you do to show to your manager and I’m gonna show you the template that my manager uses for our one on ones,” she says.

She then shows an example of the template. “We’re gonna focus on several of these. So what are my wins, what am I most proud about?” Daniela says. “Sometimes, when I don’t fill this out, my manager even tells me to fill it in. That way she’s even told me that when it comes to building out my promotion package she can just go back and copy-paste all these accomplishments.”

“It also goes on what did I focus on last week, what am I focusing on, building that out is so valuable because it shows your manager that you’re proactive and all the things that you’re doing,” she adds. “Sometimes I feel a little bit silly of the things that I put on there and sometimes it just comes to be a really fruitful conversation with my manager.”

Daniela concludes the video by encouraging professionals to “track your progress like your promotion depends on it.”

Daniela’s video also hits another salient point. She’s effectively making her manager’s job easier by advocating for her promotion when that time comes.

TikTokers added their own ideas and suggestions in the comments section that could help bolster anyone’s promotion packet.

“Also have an incident book!!!! Dates and times where managers/ colleagues did you wrong!!” another wrote.

“I’ve done this for every internship and have always gotten a return offer! having ur impact b tangible and written goes so far,” a third claimed.

Some even said this is a great way to ensure you have up-to-date materials for improving your resume if you’re looking for a new job.

“This is also a good way of keeping track of work done for a quick resume update lol aka me rn stressing,” one user said.

There were some TikTokers who thought that all of this additional correspondence was ultimately just too much work.

“Y’all have promotion packages? lmao what,” a further TikToker wrote.

For the most part, however, other users on the platform were appreciative of Daniela’s post and said that they would use a similar approach at their own jobs to better their chances of career advancement.

Update 12:05pm CT Sept. 26: In an email to the Daily Dot, Daniela explained that she hadn’t realized so many viewers had never heard of a promotion package.

“While I didn’t initially make my video to educate on a promotion package, I quickly realized that this wasn’t the norm for a large amount of companies that my followers work at,” she said. “While this was done for me at my company and the template was already created, a lot of people took interest. In 2022, you HAVE to be your biggest advocate, no one is going to be doing that for you. When it comes time to advocate for yourself, you will have already recorded your accomplishments and saved yourself a lot of time in the long run.”

In response to those who argued that a promotion package just adds more work to one’s plate, Daniela agreed. However, she says the effort can be worth it if workers have the bandwidth.

“To truly thrive in any sort of environment, you need to put in more effort,” she concluded. “However, it is important to be mindful of your mental health and burnout. A big factor of this is ensuring that you’re at a company that supports you as an individual and operates for employee excellence. While these are sometimes a diamond in the rough these days, they’re definitely out there!”