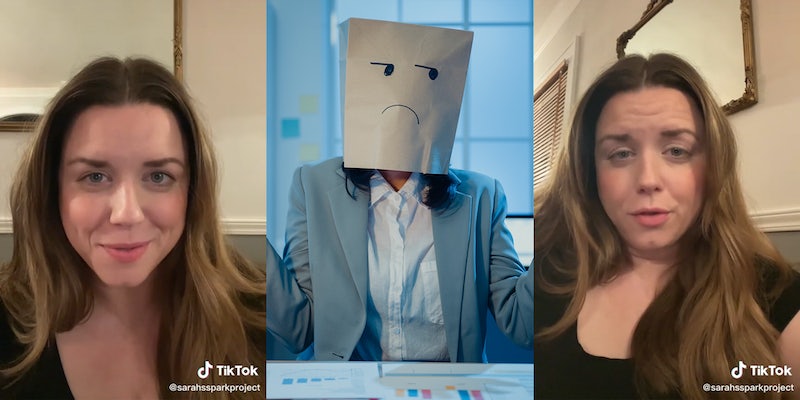 ‘He told me that I needed to help her become a better manager’: Worker says her boss made ‘toxic’ external hire instead of promoting her

'I never understood how we’re not promoted then expected to train toxic managers.'

A woman on TikTok says the manager who got hired over her right before the COVID-19 pandemic was a disaster. And when she complained to the director of her company, he told her that she needed to help the new manager become better.

The woman, named Sarah (@sarahssparkproject), shared the story by stitching another TikToker (@coach2elevate) who asked workers to share “the most toxic advice” a manager had ever given them.

In her video, Sarah says she applied for a manager position at her job three years ago, and she was told by the hiring manager that she was the top pick. She says an executive “got in the way,” and someone from outside the company got hired for the role instead.

The new manager was hired on Mar. 12, 2020, right when the pandemic hit. Because of this, they were forced to jump into a fast-paced but well-functioning stream of work, Sarah says.

The TikToker says she tried to give the new manager the benefit of the doubt, even though she was still “a little bit bitter” about not being hired for the role herself. That plan didn’t work out, she says, because the new manager “immediately” clashed with everyone, including Sarah.

In a second video, Sarah says the new manager didn’t like the close bond Sarah and her team had. She didn’t like how they worked together professionally or the processes they used, either. It became clear early on that communication was also an issue, Sarah says.

“If you had a 30-minute status with her, it would be 40 minutes of just her talking at you,” Sarah says in her video. “There was never any conversation, she never wanted to listen to what you had to say or what you were working on. It was just kind of nonsense, and a lot of us really began to question ‘why is she here? What is going on?'”

Sarah claims the new manager’s issues weren’t just annoying, but they were also hurting the business. Throughout the disaster, Sarah tried to be honest with her director about what was going on, she says. But the director would always try to defend the new manager, she adds.

Finally, Sarah had a sit-down with her director to explain that she needed things to improve and ask how they could mutually work to make things better.

“He told me that I needed to help her become a better manager,” Sarah says. “He compared it to a bridge. He said, ‘if there was a bridge and you were on either side, you can’t meet her halfway. You have to go all the way across because she doesn’t even realize that there’s a bridge.’ And I’d like to understand how that’s fair.”

“Sadly, it’s not uncommon that leaders are put in the position to lead up. That’s what your director was trying to get you to do (right or wrong),” one viewer commented.

“I’ve had to tell a few people that I’m paid to do a job, not train a superior,” a second viewer commented.

A third wrote, “I never understood how we’re not promoted then expected to train toxic managers out of their toxicity. Isn’t that his job?”