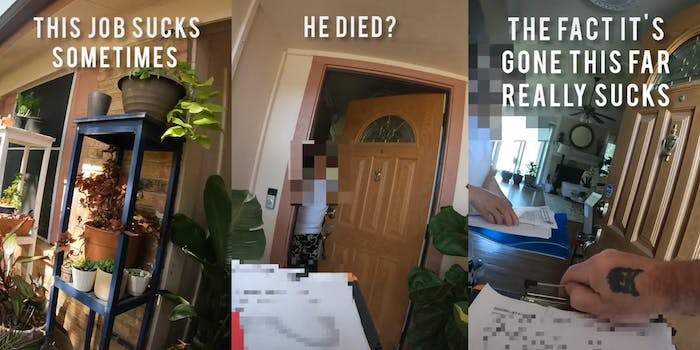 ‘This is one way to stop a lawsuit in its tracks’: Process server on TikTok tried to serve papers to a man who died over a year ago

'I've never had anyone tell me this.'

A TikToker who serves legal documents to people for a living shares an unexpected experience of trying to serve papers to a man who died over a year ago in a viral video.

“I’m a process server, I serve summons lawsuits and subpoenas to defendants on behalf of plaintiffs in person,” user @processserving says in the clip, which was posted on June 7. “Sometimes they don’t go as planned. This is one of those times.”

The creator’s page is dedicated to his job, showing different instances in which he’s served papers to defendants. He commonly records interesting situations, like serving a defendant in a park or a defendant’s unusual reaction. However, the TikToker claims he’s never experienced something like this.

In the clip, he knocks on the door of a house. No one answers so he decides to leave a door tag. Eventually, a woman opens the door. The TikToker says he’s looking for a man whose name is bleeped out.

“He’s dead, he died like one year and a half [ago],” the woman says in the clip.

“He’s my husband,” says the woman.

The woman says her husband died in November, but the year is bleeped out. According to the TikToker in the comments, the man died a year and a half ago in El Salvador, and claims this is why the United States courts were not notified.

“I’ve never had anyone tell me this,” his text overlay reads.

“I’ve got a bunch of court paperwork for him, that’s so weird,” he says to the woman. At this point, he’s unsure of whether or not she’s being honest as he notes in the text overlay.

She says he had a heart attack and offers to show the server a death certificate.

“Gotta ask for proof,” he wrote in the text overlay. “The fact it’s gone this far really sucks.”

He asks the woman to take a picture of the certificate and send it to the judge. “It’s legit,” the text overlay reads.

“Okay, perfect, well, I’m sorry for your loss, I won’t come back here and bug you again,” he tells the woman. “Enjoy your day.”

In the caption, the TikToker wrote, “this is one way to stop a lawsuit in its tracks. Can’t believe it went this far.”

As of Monday, the TikTok has over 470,000 views. In the comments, the TikToker said this is the first time this has happened in the five years he’s been a server, having served over thousands of people.

In the comments, people sympathized with the uncomfortable encounter. “Aw that lady was so sweet, I feel bad for her,” one viewer wrote.

“I can’t imagine this wife having to go through this, you were so kind,” another commented.

Others shared their experiences with process servers and death. “My coworker had a deputy try to serve a warrant for her husband… Three months after he died. She said ‘let me know if you find him!'” one said.

The Daily Dot has reached out to @processserving via TikTok comment.