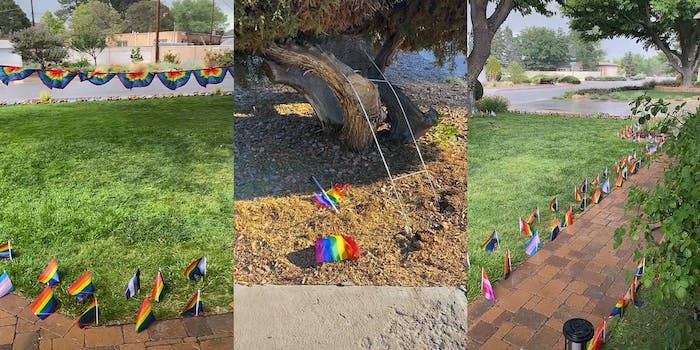 ‘If one flag bothered you that much, you are going to hate me after this’: Tiktoker lines yard with Pride flags after single flag was vandalized

Several viewers sent the creator Pride flags to fill out his lawn.

After someone destroyed a TikToker’s human rights yard sign and Pride flag, he found an interesting solution. Instead of just one LGBTQ Pride flag, user Addison (@addison.foskey) covered his entire lawn with flags, earning support and acclaim from users on the platform.

His first video on the topic has over 2.5 million views and has inspired several subsequent updates.

In the first video, Addison shows the damage.

“To the person who stole our human rights sign and tore up our Pride flag, I have two words for you: wait and watch,” his video starts. “If one flag bothered you that much, you are going to hate me after this.”

In a follow-up video, Addison revealed the collection of flags for his planned revenge.

Some users even asked to send Addison Pride flags.

In another video, Addison offered instructions on how to do so, with many taking him up on the offer. Some users requested names be added to certain flags, to which Addison obliged.

Eventually, Addison posted an update on his new yard, which is now covered in a Pride banner and many tiny Pride flags. The TikToker claims in comments that his yard now contains over 100 flags.

@addison.foskey Thank you to everyone who dropped into the Live!! It went AMAZINGLY well!!! Might do it again tomorrow, weather permitting! #live #love #lgbtq #rain #rainbow #clonedsim ♬ original sound – ClonedSIM

Users on TikTok supported Addison in his quest.

“I LOVE THE LESBIAN FLAGS AND THE FACT THWY ARE THE UP TO DATE ONES,” one user wrote.

“Prayers that no one will mess with it,” a second added. “Love it.”

Others mocked the original vandal.

“These kind of people will never know what peace and love is,” one viewer shared. “But anyways you’re gonna show em’.”

In comments, Addison clarified that, while he disagrees with the vandal, people have the right to protest. However, they must still follow the law.

“Shit, you wanna protest on the sidewalk it’s you[r] right,” he wrote. “But theft and trespassing is a different ballgame.”

The Daily Dot reached out to Addison via email.

Update 1:42pm CT, June 19: In an email to Daily Dot, Addison said he is not sure of how many pride flags he now owns.

“I think we ended up with about 600 flags? Gonna be putting more down today on a TikTok Live, people really seem to like what’s happening,” he wrote. “If nothing else, hopefully awareness will be raised.”

As of right now, “I have about 300 of them in the ground. Adding the names started randomly,” he said. “Someone commented that their Pride flag was stolen from their front yard DURING the live. I felt awful, and I just occurred to me to give them one of mine. After that, the names started pouring in.  I honestly originally expected to be done in two or three hours.”