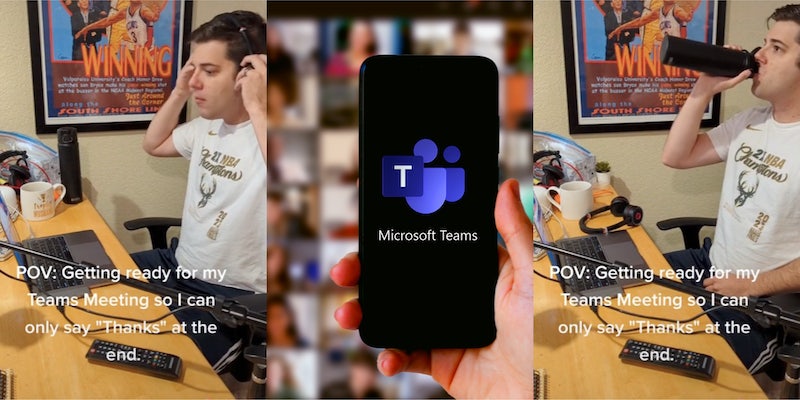 ‘I’ve just stopped saying thanks and leave the call’: Remote worker shares relatable feeling of gearing up for Microsoft Teams meetings only to contribute a ‘thanks’ at the end

'I still panic whenever the meeting is about to start.'

A man went viral on TikTok after revealing how he prepares for a Microsoft Teams meeting just to not chime in during the call.

In the video, user @koupleofkorsys gets ready for his Teams meeting. The text overlay reads, ‘POV: Getting ready for my teams meeting just to say ‘thanks’ at the end.” He sits down at his desk, a TV remote next to him while sipping his spring-loaded flip-top water bottle. Then he takes a drink of coffee from his mug and puts on his headphones. After that, he jumps straight into the meeting by logging on.

The creator asks in the caption, “Can anyone else relate to this?”

@koupleofkorsys Can anyone else relate to this? #pov #workproblems #worklife #teams ♬ Xenogenesis – TheFatRat

The video has racked up over 372,000 views as of Saturday, resonating with viewers.

“Glad that this is more universal than I thought,” one viewer wrote.

“(one hundred percent) I have nothing to contribute to most meetings I have to attend,” a second said.

“Every week, yet I still panic whenever the meeting is about to start,” another agreed.

“3/4 meetings I learn and contribute nothing,” one user added.

Others shared what they do during virtual work meetings.

“I’m having camera issues (the meeting is at 6am and I don’t want to get out of bed),” one person shared.

“The parkour sprint back to the unmute button and dropping a casual ‘I was talking but forgot to unmute,'” a second wrote.

“Gotta work in a few head nods and a smile while on mute. Create the illusion that you are engaged,” a third commented.

“i legit watch youtube in half my meetings,” one user confessed.

Virtual meetings have had a bad reputation as of late, and are considered a waste of time and unproductive by many remote workers. With the rise of remote and hybrid work, this number rose. According to Zippa, 30% of people spend an average of five hours a week in meetings and 71% of workers consider these meetings a waste of time. Another 65% agree that attending these meetings prevents them from finishing their work and tasks and at least 41% claim they multitask during them.