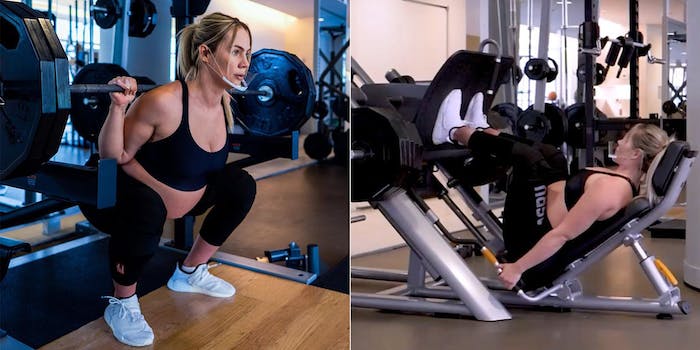 'I am confident, strong, knowledgeable, and in tune with myself and my growing child.'

In a recent Instagram video, a pregnant influencer and female weightlifter challenged her critics after being repeatedly slammed for pushing her physical limits. Many believed her being eight months pregnant should sideline her fitness goals.

The pregnant influencer and fitness trainer Yanyah Milutinović recently posted a video that shows her squatting and deadlifting 315 pounds, respectively, in a fantastic show of strength. She’s shown performing the lifts with her husband, Risel Martinez, 31.

However, though, Milutinović has been a victim of pregnant mom-shaming, with people calling her “crazy.” Predictably, the negativity comes primarily from men—armchair OB/GYNs who believe they know what’s best for women’s bodies and the welfare of unborn children they aren’t responsible for.

“If I was your husband I would have you arrested you clout hungry h—,” another commented. Yet another wrote: “Is this legal?”

One particular woman-hater wrote: “Wow…the stupid things people will do for social media attention nowadays. God forbid you burst a blood vessel or something and jeopardize your baby’s health. Is it really worth it?”

However, Milutinović wrote in the video caption, answering the naysayers:

“Imagine if I would have allowed the noise of others OPINIONS drown my inner voice? Or that I didn’t have the courage to follow my own heart, knowledge, and intuition? Imagine if I would have lived my life the way that they would want me to and that I allowed comments like these to break me down? Or dictate my decisions to live a healthy life for myself and my unborn child?

Several hundreds of comments just like this. Daily, weekly, yearly. For 7 years now, and through two fit pregnancies.

None. Not a single one that held me back, though. Not one, that stopped me.

Instead, I unapologetically did my thing, not allowing myself to be discouraged by ignorant and baseless criticism. I am confident, strong, knowledgeable, and in tune with myself and my growing child. Aware of who I am and what I want. I am built different.”

Milutinović, a Serbian-Finnish Queens, New York native, already has a 3-year-old-daughter, Smiljana, with her husband, who works as an NYPD officer. She’d already made headlines doing a similar routine for her first pregnancy, where she committed to her ongoing fitness journey as he left an abusive relationship prior to her current marriage.

Multiple reports show that continuing to exercise while pregnant can be healthy for both the mother and child and largely dependent on each woman’s pregnancy specifics and exercise regularity.