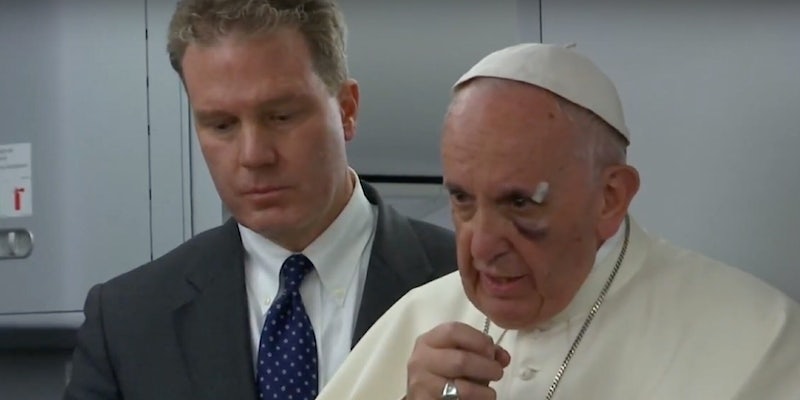 The pope is having none of Trump’s DACA-ending, climate change-denying nonsense

'Man is stupid, the Bible said.'

In the wake of the devastation from hurricanes Harvey and Irma, the leader of the Catholic state said politicians and others who deny the existence of climate change remind him of a Bible passage about stubbornness.

“Man is stupid, the Bible said,” he said, according to the New York Times. “It’s like that, when you don’t want to see, you don’t see.”

Francis urged climate change deniers to consult scientists who have proved the phenomenon is real. He said humanity would “go down” if climate change issues are not acknowledged and addressed.

The pope then criticized Trump’s plan to terminate DACA, echoing the United States Conference of Catholic Bishops, which called the decision “reprehensible.”

Francis, who has said in the past that building a wall on the border between the U.S. and Mexico is “not Christian,” said DACA’s end would hurt families and children by separating them.

“If he is a good pro-life believer, [Trump] must understand that family is the cradle of life and one must defend its unity,” Francis said.

He said he hopes the president’s administration will “rethink” its plan.