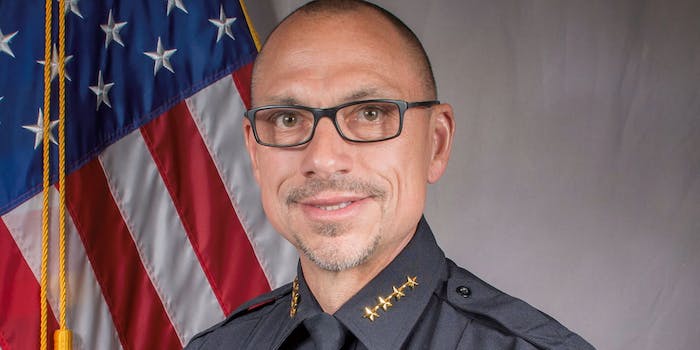 Police chief under fire for blaming officer’s coronavirus on homosexuality

A Florida police chief was put on leave on Sunday after officers accused him of saying that a sheriff’s deputy died from the coronavirus because he was a “homosexual who attended homosexual events,” the Miami Herald reports.

In a letter, Mike Tucker, Florida State Fraternal Order of Police chief of staff, said Engle “berated” and “belittled” his members in an April 7 patrol briefing after they expressed concerns regarding the coronavirus.

“He belittled our members, ordering them to the parking lot and into formation (like cadets back in the police academy),” Tucker wrote. “Chief Engle then proceeded to berate these members about the issues they raised, yelling about their ‘baseless’ concerns.”

The letter claims Engle specifically spoke about Shannon Bennett, a Broward County sheriff’s deputy who died of COVID-19 on April 3, and suggested his death from the virus was because he was a ”homosexual who attended homosexual events.”

In a department-wide email, Engle wrote that his comments were “taken out of context” and that he was attempting to “provide as much information as possible.”

Engle did not immediately respond to the Daily Dot’s request for comment.

The Davie Police Department did not immediately respond to the Daily Dot’s request for comment.

“I look forward to the fair and impartial investigation initiated by the Town Manager,” Frey said. “And I hope that appropriate action will be taken at its conclusion.”

In an April 4 press release, Broward sheriff, Tony Gregory said Bennett “was instrumental in leading the initiative to further establish unity between law enforcement and the LGBTQ community.”

Broward Sheriff’s Office honored Bennett on its Facebook page, writing that the 12-year veteran of the sheriff’s department was a “man in love whose wedding was to be held later this year.”

“What I want you to know about me is that I am a human being, I am sensitive, I have feelings, and I love the same way you love,” Bennett said.