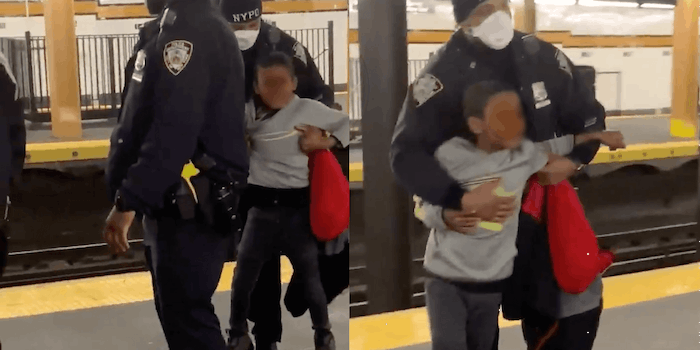 'Oh my god that little boy!'

Defense lawyer Rebecca Kavanagh shared the video in three parts on Twitter on Saturday, which has since received more than 800,000 views and retweets.

The first video in Kavanagh’s thread shows a crowd on a platform in Harlem.

The two-minute-long video starts with the crowd at a distance from the person recording the incident.

Someone from behind the camera is heard saying, “Oh my god that little boy!”

About two to three cops are seen huddled together. One of them is holding a small boy by his arms, which are behind his back, as he tries to run.

While the people behind the camera are still saying “that’s a little boy,” two people seem to intervene at the scene. The view is temporarily blocked by another person.

“You took his jacket off? Why you doing that to him?” asks one person behind the camera a few seconds later.

By the time the boy is back in the view of the camera, he’s without his jacket.  The officer pulls him, and he pushes the officer seemingly in self-defense.

There’s loud yelling at the scene. Meanwhile, the people behind the camera say the boy is crying.

Those recording the incident walk up to the scene and get a close up of the boy who is seen groaning and in distress.

In the second video posted in the thread, the officer holding the child is forcefully dragging him toward the stairs while the child is screaming.

The person recording is running across the carriage, and by the time the platform view is clear, the crowd of officers is seen huddled and moving up the stairs. The child is not seen, but from the commentary of those around, it appears that they’re dragging the child up the stairs.

In the third video, the crowd clears, and a man is seen being carried out of the station in handcuffs.

“Police arrested a man who came to the little boy’s defense,” Kavanagh wrote in the description of the video.

The Daily Dot wasn’t able to independently verify why the boy was being restrained. A woman named Betty Bleu shared Kavanagh’s tweet and identified herself as the mother of the boy early Monday morning.

“We are currently homeless and thus was our only means of survival please we need assistance getting a lawyer as we need to [sue] the city of new York and the NYPD for racial profiling and harming our minor child,” she wrote.

In response, many offered to Venmo her donations.

Instagram accounts Decolonize This Place and Take Back The Bronx shared the videos over the weekend and discussed increased police presence on New York City subways. Many viewers expressed their concerns for the child.

“This is going to scar him for life……. good job police. Hope you are all proud of yourselves,” one user wrote.

The woman who identified herself as the mother of the child on Twitter did not immediately respond to the Daily Dot’s request for comments.