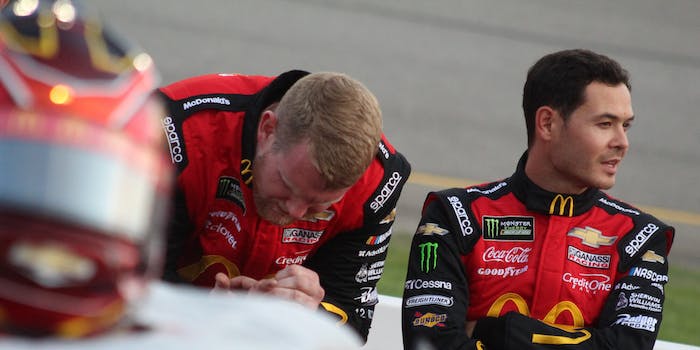 He used the N-word to test whether he could be heard.

NASCAR driver Kyle Larson has been suspended indefinitely without pay after using the N-word to test whether he could be heard.

While competing in an iRacing event on Sunday, Larson apparently lost contact over his headset. After asking, “You can’t hear me?” he used the racial slur, according to the Daily Mail.

Chip Ganassi Racing, the organization Larson was representing in the race, gave a statement about the incident.

“We are extremely disappointed by what Kyle said last night during an iRacing Event. The words that he chose to use are offensive and unacceptable,” the statement reads. “As of this moment, we are suspending Kyle without pay while we work through this situation with all appropriate parties.”

NASCAR’s own statement focused on the values of diversity and inclusion, which it says Larson violated.

Two of Larson’s sponsors, McDonald’s and Credit One Bank, have also severed ties with the racer.

“We were extremely disappointed and appalled to hear about this incident. The comments made by Kyle Larson are insensitive, offensive and not reflective of our inclusive values and will not be tolerated. McDonald’s is taking immediate action to terminate the relationship with Larson,” a representative for the fast-food chain wrote in a statement.

“Credit One Bank denounces the highly offensive language used by Kyle Larson during Sunday’s iRacing event,” the statement reads. “In addition to the quick actions taken by NASCAR and Chip Ganassi Racing, Credit One Bank is terminating its sponsorship of Kyle Larson.”

In his apology video posted to Twitter, Larson said he was “sorry” for the “unrepairable damage.”

“Hey, I just want to say I’m sorry,” Larson said. “Last night I made a mistake, and I said a word that should never, ever be said. There’s no excuse for that. I wasn’t raised that way. It’s just an awful thing to say. I feel very sorry for my family, my friends, my partners, the NASCAR community, and especially the African-American community.”