These parents are catching all the Pokémon in their neighborhoods.

Angie used to walk just two or three miles per week. Like a lot of suburban moms, she lived a fairly sedentary life. Her hometown of Largo, Florida, is mostly houses and sprawl—strip malls with parking lots that make it easier to drive from place to place than walk around. Her 11-year-old son was pretty sedentary at home, too, playing a lot of Xbox—he was “glued to” to the game, she said. She used a Google Fit app to measure how many steps she took each day, but it wasn’t much.

These days, Angie walks over 33 miles a week across the sunny streets and shady parks of Largo. Many of those are logged on long walks with her son and her fiancé, Vance. What changed?

Angie is one of thousands of Pokémoms: parents (there are Pokédads too) whose obsession with playing Pokémon Go has brought their families closer together, improved their health, and opened up their lives to a new community of friends.

“When my son doesn’t want to go, I go without him, but more often than not, we are together as a family,” Angie, who, like most of the parents contacted for this story, preferred to use only her first name, told the Daily Dot. 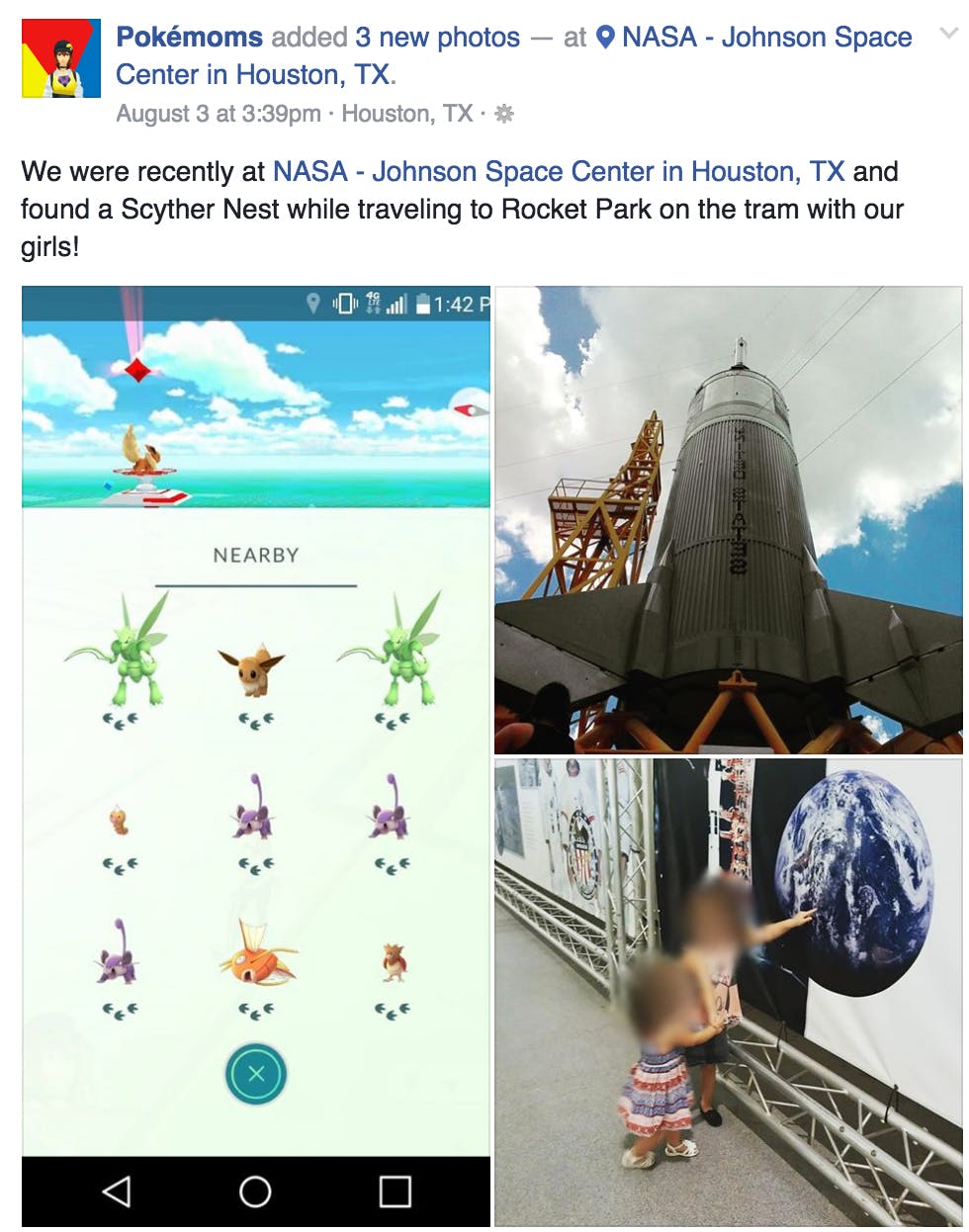 There are dozens of newly created Facebook groups and pages for Pokémoms and Poképarents like Angie. It’s no surprise that the gaming phenomenon has enraptured adults as well as kids and teens, but the way it has transformed parenting and the lives of parents themselves is truly unique.

“It has definitely gotten us out of the house more,” said another Pokémom named Nicole, who sometimes lets her 2-year-old son catch a low-power Pidgey or Rattata. “I take walks during my day at work, and we try to go walking at least two or three nights a week after dinner to catch Pokémon.”

Increased exercise is just one benefit of Poképarenting. The most impactful aspect of the game, for parents of older children, is the opportunity it provides for bonding as a family. Since the game’s July 6 release, chaperoning Pokémon hunts has become a kind of weekly (or even daily) trick-or-treating adventure—one where parents enjoy the spoils of the hunt just as much as their kids.

Johanna McDaniel is the moderator of a newly created Pokémoms page on Facebook, along with a Pinterest profile and a blog. She told the Daily Dot that she hopes to provide non-player parents with a resource that can answer their questions and help them teach kids to play safely. But mostly, it’s for parents who love gaming.

“I’m hoping to be able to create a community for parents who want to create group playdates for their children,” said McDaniel, who lives in a suburb of Dallas, Texas, “and a support group for us nerd-parents who love to play video games.”

McDaniel has seen the benefits of Pokémon Go first-hand. “Our walks have turned into nature hunts,” she said, “and a way for me to effectively introduce video games and street safety, like to look both ways, to my 3-year old.”

McDaniel stressed that parental involvement is a huge part of providing “a safe space for our children to enjoy the game.” After all, playing Pokémon Go necessitates walking around outside; the game uses mapping to place Pokémon in real locations, requiring players to walk to find them. There are also PokéStops (where players can refuel and load up on the tools they need to play the game) and gyms (where trainers battle their Pokémon for dominance over the location). Players can place “lures” on PokéStops that draw more Pokémon to the area—but without the right amount of caution and awareness, lures and tantalizing Pokémon can draw kids to remote locations or create a dangerous distraction.

In early July, police in Missouri arrested four suspects for using PokéStops to lure (quite literally) robbery victims into deserted parking lots. A few days later, two players in their 20s were so distracted by the game they accidentally walked off a cliff and sustained serious injuries. And after anecdotes spread about PokéStops being located near the residences of registered sex offenders, New York became the first state to ban sex offenders from playing Pokémon Go.

Safety is a frequent topic among Pokémoms.

“We always chaperone Vance’s Pokémon hunts,” Angie told the Daily Dot. “No matter how hard you try to not be distracted, you are distracted. It’s safer in a group.”

Angie said that most of the safety concerns related to being a Pokémon Go trainer are the same things parents already teach their kids: to avoid strangers, to look before crossing the street, and other common sense basics.

“The one concern that is really unique to Pokémon Go is the lures. When they are in an obscure area, you never know what you are walking into,” said Angie. “99 percent of the time it’s innocent, but there’s always a chance someone is using that feature to literally ‘lure.’”

Many of the moms interviewed for this story weren’t too worried about safety. The number of gyms and PokéStops where they lived were so limited, they knew exactly where their children would be while playing. Most kids aren’t allowed to go on hunts alone; either they play in groups of friends or with an adult chaperone who’s just as thrilled by the possibility of catching a Dratini as the kids are.

“It has definitely gotten us out of the house more,” said one Pokémom. “I take walks during my day at work, and we try to go walking at least two or three nights a week after dinner to catch Pokémon.”

Stashi is what obsessed players of the game might call a “legendary” Pokémom—in other words, she’s rare. A mother of five children ranging in ages 1 to 9, Stashi plays Pokémon Go all by herself. Because the smartphones and tablets required to play the game can be expensive, her family shares one tablet that they take turns playing with. But mom’s phone is what allows her to get out of the house and take some direly needed “me time.”

“I don’t go walking until late in the evenings once [my husband] is home,” Stashi told the Daily Dot in an email, explaining that her husband works long hours while she’s running the household. Her nightly walks take her in a circle around her small Bible Belt town a few times.

“So the kids are home and—hopefully but not always—sleeping when I go walking,” she said. “The next day, my kids always want to see what I caught or what hatched. They get so excited about it.”

The proliferation of Facebook groups and other Pokémom forums is perfect for a player like Stashi, who doesn’t know a lot of parents—or kids, for that matter—who are into the game. On mommy blogs like Babycenter and WhatToExpect, moms have been sharing tales of bonding at the park with other parents, putting together teams and hunting groups, and even throwing special community events driven by the need to catch ’em all. In other words: Pokémoms are the new soccer moms.

“I am in the works of coordinating a family-friendly picnic on our town’s square that has five PokéStops and a highly fought-after gym within a very small radius,” said McDaniel, adding that she’s already been taking her kids on group hunts with a friend and her son.

2016 may be cemented in history as the summer of Pokémon Go, but the impending back-to-school rush promises to bring new challenges as parents try to ensure their kids are balancing schoolwork with gaming.

On the other hand, some moms are more concerned about their own stats. As blogger Yolanda Lattimore warned on Twitter, kids who think they have a lock on the game should watch out for competition where they least expect it.

“Be warned,” she wrote. “Pokémoms taking over all Pokémon Go gyms when school’s back in session.”