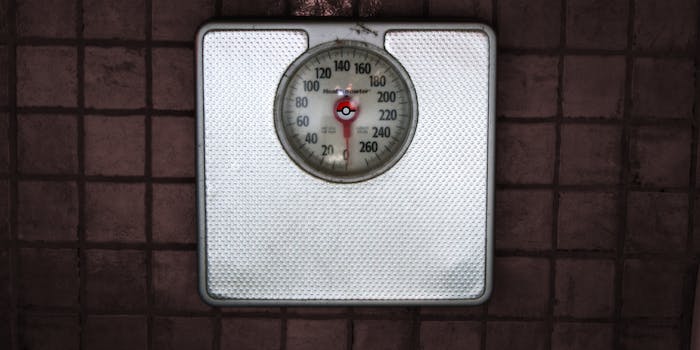 How many calories do you burn playing Pokémon Go?

Depends on how much you Pokéstop-and-go

Let’s be real: Pokémon Go is a sneaky way to get people to exercise. But MyFitnessPal does not yet have a calories-burned calculator for playing Pokémon Go. You might think simply logging the amount of time you spend playing under the “walking” option is good enough, but is it? How fast do you walk, on average, while playing the game, and is it meaningfully different from if you were walking around in your everyday, un-augmented reality?

To try and answer this question, I conducted a little experiment. I walked around Lake Merritt in Oakland, California twice. For the first of the 3.2-mile laps, I simply walked without breaking stride and without looking at my phone. Then I did the lap again while playing Pokémon Go without stopping. I only allowed myself to slow down while walking if I was catching a Pokémon.

Along the way I leveled up once, hatched two eggs, and my biggest get was a CP 589 Tauros (I was level 11 at the time, so that was a pretty big deal for me). And the whole lap took exactly 1 hour, 7 minutes, and 20 seconds. When I wasn’t playing, it only took me 56 minutes and 38 seconds to walk around the lake.

To be sure, a difference of 10 minutes over three miles is pretty negligible in terms of calories burned. But let’s do the math anyway. (Scroll to the bottom for a TL;DR explanation of how to do this math yourself.)

I spoke with Jonathan Ross, a personal trainer with Aion Fitness, to get a sense of what I needed to do to figure out how many calories I burned doing this, because I was looking for pretty granular data. He suggested I figure out my average walking pace for each trial, and then look up a factor called the MET, or metabolic equivalent, of that pace. METs are how researchers determine how many calories people burn via exercise, but more on that later.

Disclaimer: these are imperfect estimates. Short of calculating the exact MET for my specific paces, I had to rely on the work of others.

Using this extensive MET table, I found that walking between 2.8 and 3.2 miles per hour had an MET of 3.5, and walking 3.5 miles had an MET of 4.3. I realize there’s probably a lower MET for the 0.1 mph I was walking slower than that, but once we’re done you’ll see it hardly matters. Also, the METs don’t change at a consistent rate over walking speeds, so this is all just an approximation.

So is Pokémon Go a legit form of exercise?

“In general, if you’re starting with someone who has no activity at all, certainly that’s going to be an improvement,” Ross said.

But he warned that, even in walking, proper form is important. He advised that people playing Pokémon Go should be sure to keep good posture while playing and to be mindful of hunching over their phones.

“For someone who is moving solely because they’re fully addicted to the game—if their movement is really only driven by that desire to achieve those game tasks—then there’s probably not going to be any lasting behavior change,” Ross said. “They’re not connecting with the movement.”

So if you want your new habits to stick long after you’ve caught all the Pokémon, Ross suggests being mindful of how you feel before and after you go on your Pokésafari. He also suggested getting a group together to play together, but to be sure you don’t always reward yourself with happy hour. Alternatively, at the suggestion of Parsec editor, Sarah Weber: just do some squats every time you stop at a Pokéstop.

TL;DR: How to estimate your own caloric burn for Pokémon Go:

Step 1: Determine your average walking speed in miles per hour. (I did this by timing my lap and then mapping my route on Google maps. You might want to use a different method, such as Map My Walk, if you are walking up and down hills)

Step 3: Multiply your weight in kilograms (weight in pounds divided by 2.2) times the MET for your walking speed. The answer is your estimated calories burned per hour, so be sure to adjust for the amount of time you actually spent walking—simply divide your calories burned per hour by the amount of time you walked, being sure to convert minutes to hours first.

Or you could just use something like a Fitbit, but then you’re relying on their math instead of doing your own.

Level-up your science knowledge by asking me a question at [email protected]. It may get featured in an article.