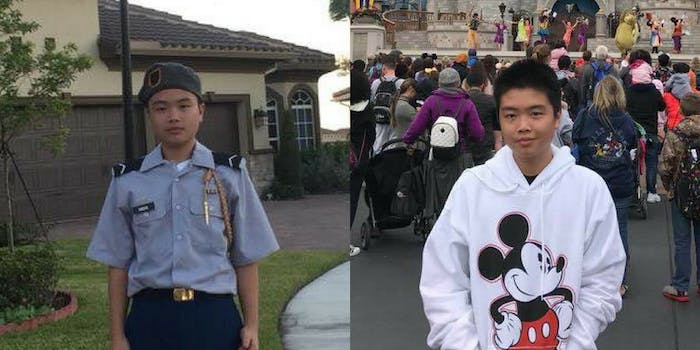 Service members want to honor the student who saved others.

The internet is attempting to honor 15-year-old Peter Wang, a freshman at Marjory Stoneman Douglas High School who was among the 17 people killed in the mass shooting in Parkland, Florida. Aaron Chen, Wang’s cousin, told the Miami Herald that Wang was last seen wearing his gray JROTC uniform and holding a door open for other students to escape before him.

Wang had dreams of going to West Point, according to Local10.com. Across the internet, classmates and sympathetic supporters want to honor him just the same, with at 22,000 people so far signing a We The People petition calling upon the White House to honor Wang with a military burial.

“Peter Wang, 15, was one of the students killed in Florida this past week. He was a Jrotc Cadet who was last seen, in uniform, holding doors open and thus allowing other students, teachers, and staff to flee to safety. Wang was killed in the process,” the petition summary states. “His selfless and heroic actions have led to the survival of dozens in the area. Wang died a hero, and deserves to be treated as such, and deserves a full honors military burial.”

While Wang likely can’t be buried with full military honors because he wasn’t a service member, military members across Reddit thread /r/military have organized to attend Wang’s funeral on Tuesday, and are sending his family unit patches and challenge coins in lieu of their presence.

Family friends of the Wangs said the school’s JROTC unit is performing the honor guard and funeral, according to Reddit posts coordinating these efforts. Wang’s parents, who own a Chinese restaurant across the street from the high school, will donate previous GoFundMe funds totaling more than $16,000 to the school’s JROTC program.

The White House petition must clear 100,000 signatures by March 18 for an official White House response. However, Trump has yet to respond to any petition hitting 100,000 since taking office, the Hill has pointed out. Officials have promised to begin responding after the new website launched earlier this month.

“I want people to know that he died a hero, that he died saving many people,” Aiden Ortiz, a classmate and friend of Wang’s, told Local10.com.