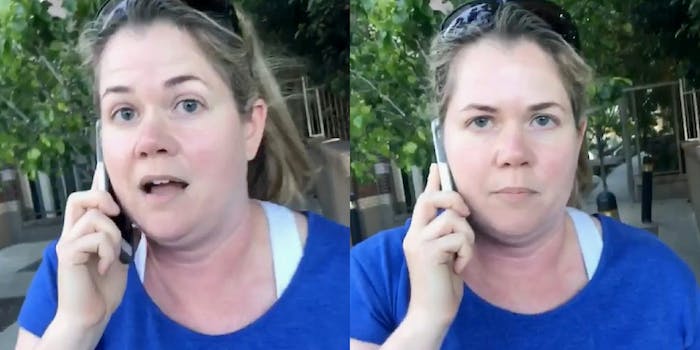 Permit Patty, the white woman who went viral last weekend for getting so upset at a Black 8-year-old selling water that she “pretended” to call the police, didn’t just gaslight fear into the child. Despite saying that she “didn’t actually call the police” on the girl, Jordan Rodgers, and her mom, Erin Austin, last weekend, 911 call records show that Permit Patty, real name Alison Ettel, most definitely did.

In the call recording, Ettel is heard saying, “Oh, I’m sorry,” and once the 911 dispatch answers the call, says, “Hi, yes, I’m on the sidewalk. Hi, I’m having someone that does not have a vendor permit that’s selling water across from the ballpark.” She then asks if there’s someone she can talk to “about that.”

The dispatch then attempts to transfer her to the police department (perhaps because selling water “without a permit” isn’t an emergency), at which point the call disconnects. KTVU reports that whether Permit Patty hung up, or was disconnected by accident, is unclear.

San Francisco Police Dispatch records reportedly log the call as a “suspicious person” report, while KTVU confirmed that the call was made from Ettel’s cell phone.

Ettel has denied that the girl’s race had any role in her decision to be aggressive toward the child, stating that she had let her emotions run amok because of the “noise” Rodgers and Ettel were making. She’s also since apologized for her behavior, saying she felt “horrible and heart-wrenched,” while also losing her position as CEO of a cannabis company over it.

But this lie, that she didn’t call police on a child when she definitely did, shows that at the very least Ettel completely understood the implications of making the phone call—that’d she be perceived as a racist. Let’s say Permit Patty was the one who disconnected the phone call, and perhaps by saying she did “not actually calling the police,” she meant that she didn’t file a formal police report. Did she hang up because she realized she was overreacting? Did she hang up because she realized that she could be putting a Black child’s life in danger by involving the police?

Despite the fact that she made the call in the first place, and possibly hung up, I’m giving Ettel too much credit. The Instagram clip of her that went viral, recorded by Austin, shows Ettel saying “illegally selling water without a permit,” which is not a phrase she said during the recorded 911 call. This either means that Ettel was either so righteous about teaching this family a lesson that she either pretended to make a call before actually calling the police, or that even after having her call disconnected, or perhaps choosing to end the call herself, she still wanted to scare the child into thinking that police were on the way to confront her for selling water.

The fact that she outright lied about calling the police shows, at the very least, that she wanted to cover herself to avoid genuine retribution, and that she did so because she understood that, at the very least, actually having called the police would have made her seem racist. Just as Ettel tried to convince Rodgers that the police would be coming after her for selling water, Ettel may just have convinced herself that she isn’t a bad, or racist, person, because she’s convinced herself that she didn’t actually call the police.

It’s time for women like Permit Patty, and BBQ Becky, and Pool Patrol Paula, to analyze their own behavior and understand the role that racism and bias play in their decisions.

Austin did not immediately respond to the Daily Dot’s request for comment via her and Rodger’s GoFundMe campaign.