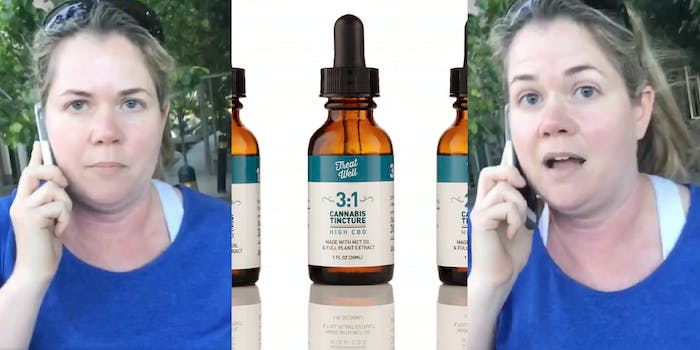 Permit Patty, the white woman who was so disgruntled by a Black child selling bottled water outside her apartment complex that she threatened to call the police, is getting her just desserts as vendors and other groups pull support for her cannabis company.

Over the weekend, TreatWell CEO Alison Ettel went viral after Erin Austin, mother of 8-year-old Jordan Rodgers, recorded Ettel pretending to call the police on the child. The family also lives in the apartment building, and Rodgers was selling water to passersby going to a San Francisco Giants game in order to raise money for tickets to Disneyland.

Austin, who recorded Ettel making the fake call, dubbed the CEO Permit Patty in a caption for the video. The nickname echoes the viral video monicker of “BBQ Becky,” another Bay Area white woman who called the police on Black barbecuers in April because they were using charcoal in a charcoal-free area of a public park. And just like Becky, Permit Patty possessed self-righteousness in her attempt to self-police and bust the chops of a Black family for no reason.

Ettel denies having lashed out at Rodgers because of race and says she regrets handling the situation as she did. Now it appears companies associated with Ettel’s venture TreatWell, which develops and sells cannabis tinctures for people and pets, are having buyers remorse, too, Mic reports.

In the days following Ettel’s Permit Patty virality, reviewers and sellers of TreatWell products are promising they will no longer do business with her. Mic reports that at least six businesses have distanced themselves from TreatWell.

A California-based website, Ganjly, has removed its 2017 review of a TreatWell product. Green Trees Wellness in Lake Tahoe, California, has also pulled TreatWell from the shelves, telling Mic that Ettel’s exclusion was a move for overall inclusivity.

“This issue was initially brought to our attention via numerous social media posts, and we felt it was extremely important as an inclusive collective to have an immediate response that communicated to our valued customers, vendors and community supporters that Green Trees Wellness denounces Ms. Ettel’s behavior,” company president David Abarta said in a statement.

Other dispensaries include Magnolia, the Apothecarium, and the Bloom Room in the Bay Area. According to Leafly, area retailers SPARC and Barbary Coast announced they’ll also be dropping TreatWell.

Like many of you, we are learning about the situation with Treatwell in real time today. We are deeply concerned with what we’ve learned and have decided to discontinue our relationship with Treatwell. We will be selling our remaining stock at a discount and will donate (cont..)

Leafly reports that other organizations and conferences have cut their ties. Women Grow, a women’s cannabis grower collective, stated that Ettel hadn’t been an organization member since 2016. Ettel spoke at a Women Grow summit that year. New West Summit, an annual cannabis tech conference where Ettel was a panelist in 2017, said it wouldn’t work with TreatWell until she issues an apology and allows some time to pass.

Speaking on NBC’s Today on Tuesday, Ettel said she had tried to be polite to the family but was stern.

“And I said, ‘Please, I’m trying to work. You’re screaming. You’re yelling, and people have open windows. It’s a hot day. Can you please keep it down?'” she said.

But Austin says Ettel never asked them to be quiet, only demanded that the girl show her a permit for selling water.

The backlash Ettel is facing as a result of her pointed behavior is ironic at the least. Ettel wanted a Black child to provide a sidewalk sales permit. But she’s the CEO of a company in an industry that was pioneered by Black people, who are punished with jail time because of it. Now, as cannabis becomes legal to cultivate and sell in the U.S., Ettel and other white-owned businesses have an opportunity to capitalize—while people of color with decades-long experiences are unable to get permits to participate because of their past drug offenses.

TreatWell did not respond to the Daily Dot’s request for comment.

Update 3:52pm CT, June 28: According to Inside Edition, Alison Ettel has resigned as CEO of TreatWell.

“It is Ms. Ettel’s belief that TreatWell, its employees and patients should not have to suffer because of a situation that occurred in an escalated moment,” TreatWell spokeswoman Cynthia Gonzalez said in a statement.