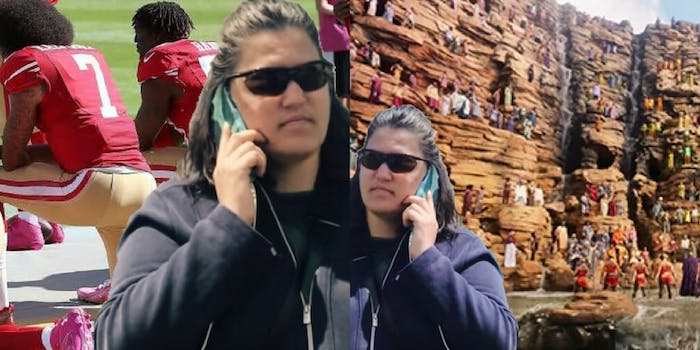 Finally, a meme embodying racists who call the cops on Black people for no reason.

A white woman who called the cops on an Oakland cookout is now a viral meme that calls attention to the everyday racism Black people face in America. The memes show that no matter what ordinary activities Black people are doing as they mind their own business, this white woman will always be one step behind them, phoning the police to tell them, “I don’t feel safe.”

For example, here she is phoning it in during President Barack Obama‘s inauguration.

The Oakland barbecue racist lady memes are why I love Twitter. pic.twitter.com/4TDEYztmS8

And she definitely has a problem with Rosa Parks taking “her” seat at the front of the bus.

While the Root has dubbed this meme the “Oakland Cookout Meme,” Know Your Meme has more broadly called it “White Woman Calling The Cops.” The white woman in question comes from an April 29 incident during which a white woman in Oakland called the police on Black men who were barbecuing in a public park.

The woman was so strongly moved to call the police because the barbecuers were using charcoal in an area restricting the use of charcoal grills. “It causes extra money from our city to do things when children get injured because of improperly disposed coals,” the woman told people recording her when asked why she cared so much.

According to the San Francisco Chronicle, the men ultimately were in a non-charcoal grilling area, but one of the men barbecuing said he had seen groups using charcoal in that same area just the weekend prior. Police ultimately came to the park and took down statements from both parties, but didn’t arrest anyone nor issue citations.

Regardless of where the men were stationed, however, calling up emergency first responders is certainly not how to go about people grilling in the park. Nearly two weeks after the incident, the video of the white woman calling the cops went viral, showcasing another instance of white people phoning it in to the cops when they see Black people simply living—such as sitting in a Philadelphia Starbucks, leaving a California Airbnb, or sleeping in their Yale dormitory. You know, things white people do every day and no one thinks twice.

In response to this woman’s misplaced righteousness, members of Oakland’s Black community gathered at the same park last weekend for a massive cookout, showing that there’s no way a self-deputized barbecue monitor was going to scare away people who have a right to be there.

How Black Oakland responds to a white lady calling the cops on Black folks BBQing… pic.twitter.com/kRdJpnmXQ2

According to Know Your Meme, the image of the white woman calling the cops shot into memedom when Daily Show correspondent Roy Wood Jr. compared the woman to the meme of the Black man on the phone suggesting that the former replace the latter.

Comic Tim Barnes then thought to show this white woman calling the cops on Chadwick Boseman’s commencement speech at a graduation, showing that not even Black Panther speaking at a celebration of higher education is safe from the wrath of this racist woman.

And that’s when the photo-edited memes came in, with meme makers splicing the woman into historical and fictional contexts.

She’s in the background of Childish Gambino’s music video for “This is America,” proving Gambino’s point of the film.

She’s calling the cops on Colin Kaepernick and his teammates for kneeling during the national anthem.

Martin Luther King Jr. had a dream? She’s turning the March on Washington into a literal nightmare.

Who. Did. This. *screaming* pic.twitter.com/IImi2Axxq1

Be it Obama, Beyoncé, Black Panther, or Wakanda, this racist white woman wants the police on these people, now.

Not even God himself, Morgan Freeman, is safe.

Calling the cops of crowds of Black people enjoying themselves is her specialty.

Hello officer, it’s me Susan. I’ve found myself at an ethnic gathering and they keep claiming it’s LIT. I think they’re about to start a fire. I don’t feel safe

Yes, the barbecuers walked away without a ticket or arrest, but maybe this meme will make others think twice before they seriously waste people’s time and mess up someone’s life over something as small as a charcoal grill.