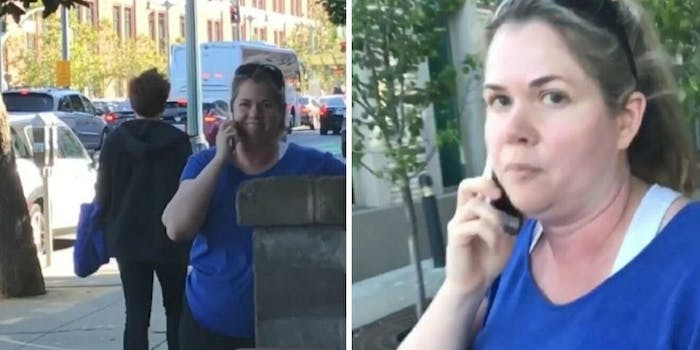 A white woman on Saturday called the police on an 8-year-old Black girl for selling water “illegally” outside an apartment building. But the woman, Allison Ettel, said she wasn’t being racist and that she was only pretending to call the cops.

“I have no problem with enterprising young women. I want to support that little girl. It was all the mother and just about being quiet,” Ettel told the Huffington Post. “… It was stupid. I completely regret that I handled that so poorly. It was completely stress-related, and I should have never confronted her. That was a mistake, a complete mistake. Please don’t make me sound horrible.”

The incident occurred in San Francisco in front of an apartment building, and according to Ettel, she grew frustrated because they were so loud in trying to sell water. Ettel’s solution, then, was to call the police—or to pretend to call the police.

Instagram user @ladyesowavy, the girl’s mother, recorded Ettel on her phone and wrote, “Make this bitch go viral like #bbqbecky she’s #permitpatty would you rather my daughter be out here getting into shit Fr cuz an 8 year old selling water in front of her apartment building where she’s lived her whole life is NOT a reason to call the Police.”

The mother referenced #bbqbecky, the white woman in Oakland who called the police on a group of Black people who were barbecuing in a park in April, because she said they were using charcoal in an area that prohibited charcoal grills.

“This woman don’t want a little girl to sell some water, she’s calling the police on an 8-year-old little girl,” the mother said. After Ettel ducked behind a wall, the mother approached her and said, “You can hide all you want, the whole world gonna see you, boo.”

“On my property,” the mother said.

“It’s not your property,” Ettel responded.

Ettel later told the Huffington Post that the mother and daughter were “screaming” about the water they were selling. She said she felt “horrible and heart-wrenched” after the incident.

“They were screaming about what they were selling,” she said. “It was literally nonstop. It was every two seconds, ‘Come and buy my water.’ It was continuous and it wasn’t a soft voice, it was screaming … I had been putting up with this for hours, and I just snapped,”

She also said the incident had nothing to do with race; it was only about the volume of their salesmanship.

According to Heavy.com, the police never arrived.

But Ettel has now become known as #PermitPatty, and Twitter took particular delight with the fact that Ettel is the CEO of a company that sells marijuana products for people and animals.

Wait a doggone minute. You're telling me that #PermitPatty sells weed for a living? You 53% are some bold mofos. #AllisonEttel

Imagine being a white women selling cannbis calling the police on a black girl for selling water. Imagine the privilege. #PermitPatty

Now, according to SF Gate, Ettel is receiving death threats. “It was wrong, and I wish I could take it back,” she told SF Gate.