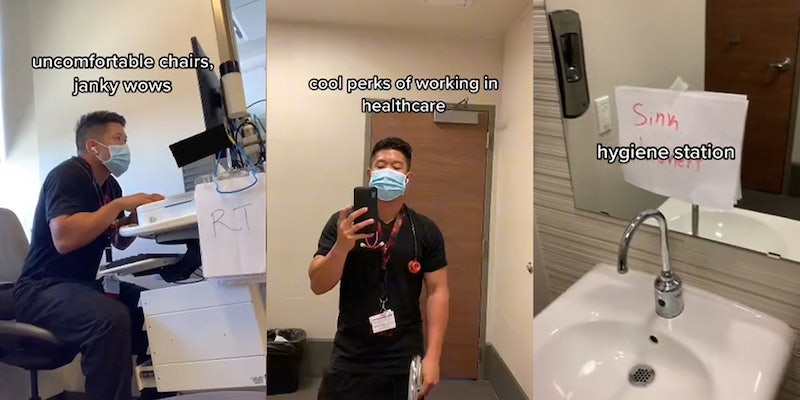 'Something needs to change about the culture of medicine.'

In a viral video, healthcare worker Hardwell (@rthardwell) stitched another viral TikTok about the perks of being in the tech industry with his (sarcastic) idea of healthcare perks.

“For all you undecided out there, pick wisely lol,” the caption said. The video has over 3.9 million views.

The video begins with Hardwell comparing his breakfast to the original TikToker Vivvie (@vivviey). He notes his breakfast was not free, but $8.76. He then proceeds to show other perks that aren’t very advantageous such as hospital water, a broken sink, uncomfortable chairs, and a quick lunch.

When compared to the tech worker’s perks which include a candy station, skyline views, and a sandwich bar, the healthcare perspective is less lively. Hardwell also revealed that “most hospitals also make employees pay for parking.”

In the comments section, healthcare workers and users share their thoughts on the stark comparison.

“I get free snacks. They’re for the patients but I decided I deserve them,” one user said.

“​​Something needs to change about the culture of medicine,” another commented.

“But still thankful for those in healthcare saving lives and all,” a third user said.

Hardwell’s page is dedicated to healthcare-related jokes, skits, and “relatable dark medical humor,” according to his bio.

The Daily Dot reached out to Hardwell via TikTok comment.