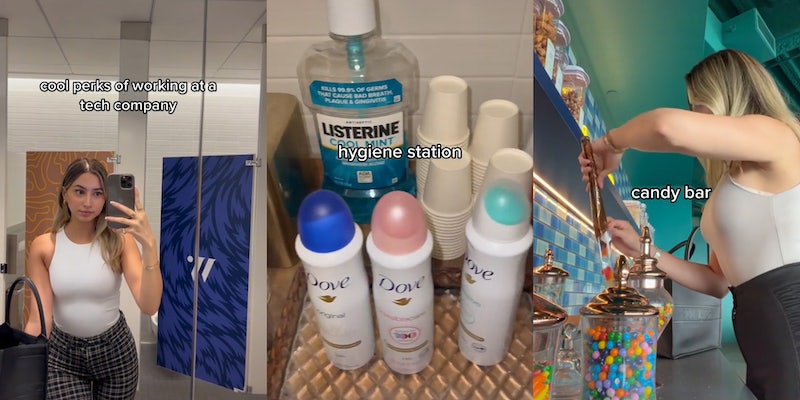 A worker took TikTokers on a tour around her office, showing off the perks offered to her and her co-workers at the tech company.

User Vivvie (@vivviey) posted her video earlier in the week. She claims that the office has free breakfast, a hygiene station, hair tools, unlimited snacks, as well as a candy and sandwich bar.

While some users were in favor of the benefit-stocked workplace, others speculated that the company’s motives may actually be to keep workers in the office, not just make their workdays better.

The video currently has over 4.3 million views.

On one side, some users supported this style of office.

“I just don’t understand why other companies don’t adopt these,” one user wrote. “It’s a win win for employer and employee.”

“Stuff like this makes employees want to work hard and show up,” another user added. “But instead so many comp want to make workplaces hell.”

“Taking notes for when I one day open my own business,” a third stated. “This is such a simple but necessary thing for companies to do for their employees.”

There may be some truth in these claims. In 2015, USA Today reported on a study that claimed that while “56%, of full-time employees are ‘extremely’ or ‘very’ happy with their current job, that number jumps to 67% among those who have access to free food.”

However, according to some TikTokers, the employer’s plan is not really to make the employees happy—it’s to keep them in the office.

“This just encourages workers to arrive earlier and stay late hours, assimilating being at work with being at home,” claimed one user. “Aka…a capitalist ploy.”

“It’s a trick to keep you at work 24/7,” a second stated. Vivvie responded to this comment with, “lol well it works.”

“We love an employer that makes sure you never have to leave their office and have any personal time,” a further user concluded.