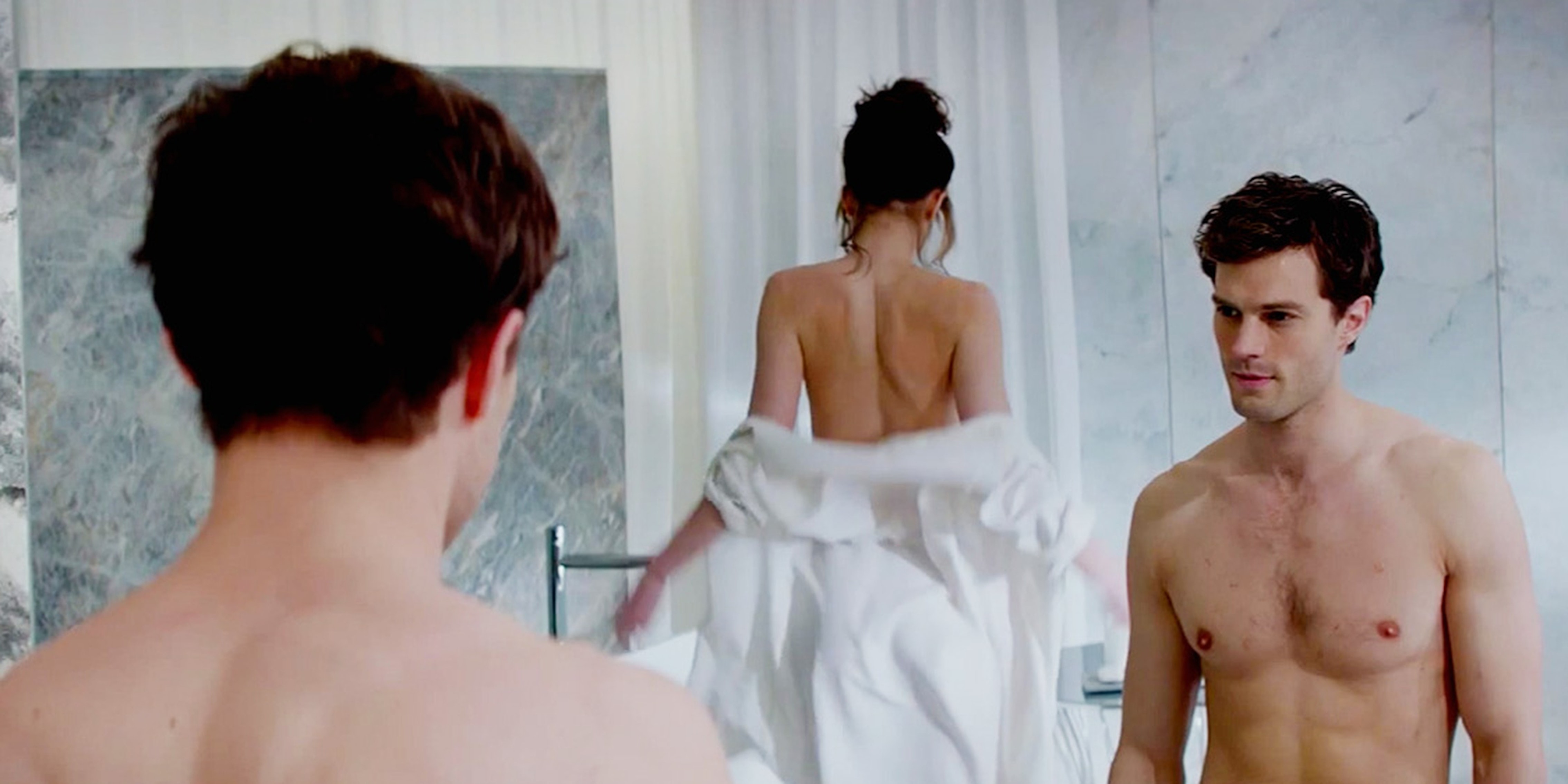 Why are we so afraid of period sex?

The producers of 50 Shades of Grey just pulled out one of the most important parts of the story without anyone's consent.

At least some Fifty Shades of Grey fans were disappointed to learn this week that the film adaptation of the first book, opening next month, will not be featuring one of the most infamous sex scenes of all time. The tampon scene, as it’s known, marks an important point in the relationship between Christian Grey and Ana Steele—but it was apparently a little bit too much for an R rating. When faced with the need to tone down some of the sex, the producers didn’t even have to think about it; this scene was dumped in the toilet right from the start, and discussion about it has been clogging the Internet ever since.

The film presents a highly sanitized, stylized world, and it’s one where there’s no room for period sex.

The fact that the tampon scene wasn’t even considered for inclusion is a telling testimony both to the story they want to tell in the movie, and to the way we view female sexuality in the real world. Fifty Shades is meant to be a love story, and scenes where men yank out tampons and force their partners to have sex aren’t loving—and periods themselves are gross, messy, and unpleasant, not the sort of thing viewers want to see on screen, let alone in the outside world. The film presents a highly sanitized, stylized world, and it’s one where there’s no room for period sex or for scenes with highly dubious consent—viewers want steamy shower sex and sultry rolling around in the sheets, not a scene where the inner goddess comes out to play.

A variation on the scene could have shown Ana enthusiastically consenting, perhaps even getting excited about the idea, drawn to it as a fetish she’s every bit as interested in exploring as being tied up or blindfolded. Or it could have shown the moment as utterly normative, demystifying period sex and turning it into an ordinary, unremarkable activity.

The moment in the book, and by extension the film, could have been utterly groundbreaking had it been handled well. Kadeen Griffiths at Bustle notes that “it punches any taboos about period sex in the face” but adds that “the poor girl was just trying to go take a shower and, like, what about boundaries?” Therein lies the problem with the scene. Instead of being an empowering moment about taking back female sexuality and openly admitting that some women do have sex while menstruating (and they enjoy it), the scene became yet another opportunity for Grey to exert his power.

This is more than a little disappointing. Instead of becoming an opportunity to talk openly about the subject, it becomes a scene people shrink away from (i.e., “the tampon scene”), and it’s unclear whether people are grossed out by the subject matter or how it’s approached. Given the adoration of the series among its demographic, it might have had a powerful impact on how readers viewed their own sexuality—and their menstrual cycles.

The wild success of the series says something troubling about how we view women.

It reinforced the idea that periods are disgusting, but that even while menstruating, Ana was expected to serve Christian under the terms of their bizarre contract. A woman stripped of all autonomy and the ability to actively consent is not a liberated one, and the wild success of the series says something troubling about how we view women. Ladies are sex toys, a means to an end, and objects to be dominated, but not independent beings with the capacity for consent and the ability to make their own decisions about their sexuality—including decisions that enhance sexual pleasure.

The BDSM-lite of Fifty Shades is told in a way that’s supposed to make Grey sexually powerful and appealing; he’s a little naughty, a little saucy, but not bad enough to make non-kinky audiences uncomfortable, though even watered down, it’s apparently too much for some. Shaunna Murphy at MTV refers to the “taboo sex stuff” and the “extremely graphic, sadist stuff” in sort of hushed, nervous tones.

It’s not just the period sex that many people might find unsettling, but the clear and hard lack of consent.

The film adaptation of the book isn’t just softening back on the “sadist stuff” in order to get an R rating and appeal to a broader audience. It’s also well aware that audiences have limits, and that even those enraptured by a love story might be brought up short by a scene that violates multiple taboos. It’s not just the period sex that many people might find unsettling, but the clear and hard lack of consent, where Ana has no real role in deciding if she wants to have sex, something many vagina-equipped readers cringed to read.

It would have tainted the audience’s sympathy for Christian Grey, not something you want to do in what you hope will be a multi-film franchise. The producers are counting on a film that leaves audiences breathless and panting for more, not an audience that feels repulsed by a creepy, violating main character. Eventually, audience tolerance for Grey has to reach a breaking point, which requires walking a delicate tightrope, and this scene would have pushed things over the edge for many viewers. Fans might be able to identify with and get excited by some light spanking and blindfolds, but forcibly removing an object from a woman’s body to demand sex from her would have been too much.

Producer Michael De Luca explained that “the book needed to put you in Ana’s shoes to be a successful experience.” He continued, “A lot of it was very literal. The movie didn’t need to do that.” But in a way, that’s precisely why that scene should have been included, because it put readers squarely in the shoes of a young woman who is being exploited and violated by an older man with no respect for her boundaries and sexual autonomy. This, however, might not be the story viewers want to see, but arguably, it’s the one we should be talking about right now.