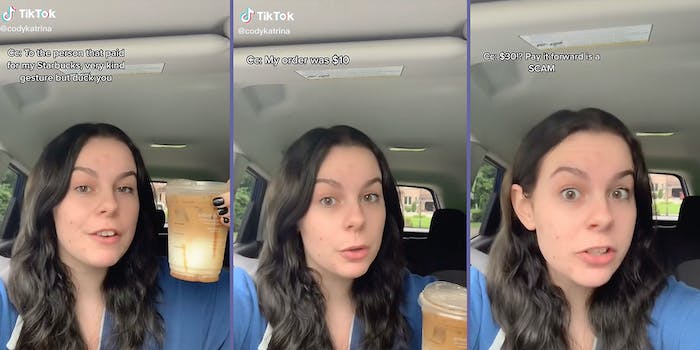 A viral TikTok prompted a debate over “paying it forward” after the creator complained about paying $30 for the order behind her at a Starbucks drive-thru.

She calls “paying it forward,” a gesture in which customers pay for the orders behind them, a “scam.” She captioned the video, “We live in a toxic society.”

The video received over 1.6 million views and 180,000 likes along with a wave of criticism from other users.

“This is VERY clearly a joke. I was being dramatic for the joke, the caption is ‘we live in a toxic society’ in what world is that serious?” the creator said in a comment.

But many users felt she was serious and criticized her complaint.

“You don’t have to participate in pay it forward if you don’t want to. No one is forcing you to… The only person you have to be mad [as] is yourself…” one user wrote.

“Oh wow you’re mad bc someone was trying to be a nice person? If you have 30$ to spend do it! If not just say no. don’t say being nice is a scam,” another user said.

Some users shared suggestions to continue the kind sentiment without getting stuck with a large bill.

“I’ve always said just pay what YOUR order was. If it was only 5 and the one behind you is 20 that’s 5 bucks they’re saving. STILL a nice surprise,” one user suggested.

“I get yr anxiety & thanks to u I now hv a plan – I decline, pay for myself & ask the offer to be paid to the person behind me. Wld that work???”

“Pay it forward makes my managers mad and give ME anxiety because sometimes cars swap and it messes up the whole thing,” another said.

The Daily Dot reached out to @codykatrina and Starbucks for comment.