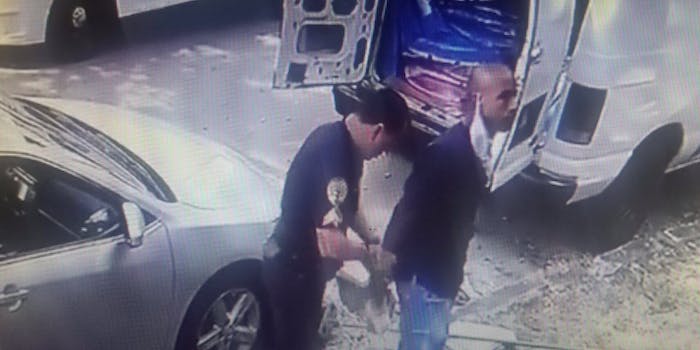 Dr. Armen Henderson administers coronavirus tests to the homeless and was detained in front of his own home.

A Black doctor working on the frontlines of the coronavirus pandemic was handcuffed by an officer in front of his own home on Friday.

Dr. Armen Henderson—a University of Miami Health System internal medicine physician who was recently recognized for his work in administering tests to Miami’s homeless population—was loading his truck with supplies for the homeless and placing trash on the sidewalk when he was handcuffed and detained by a Miami police sergeant.

“[He] asked me what I was doing, if I was littering etc, and I told him no, I live here and this is basically where we put our trash,” Henderson told MSNBC in a recent interview.

He recalled to ABC News that after he told the sergeant “thank you” and “turned around to get back to what I was doing,” the officer got out of the police car and started yelling at him.

”’You call me sergeant when I’m talking to you, and blah, blah, blah. And, you know what, give me your I.D.,”’ Henderson recalled the sergeant saying.

The sergeant then handcuffed Henderson after he said he didn’t have identification on him. Henderson’s wife brought his I.D. outside, and Henderson was eventually released.

“He didn’t apologize. He just got in his car and drove away,” Henderson told ABC News.

The incident was captured by his home surveillance footage.

The sergeant in question wasn’t wearing a mask, which worries Henderson. Miami-Dade Police Chief Jorge Colina announced three days prior to the incident that there are at least six confirmed coronavirus cases within the Miami-Dade Police Department, with 125 pending test results.

“He put me at risk,” Henderson told ABC News. “Now I feel like I should get tested, honestly. Most likely I will because he definitely was spitting in my face. I could feel it while he was yelling at me.”

On Saturday, Colina said in a Facebook video that the department condemns racial profiling and is investigating the incident.

“We have had a litany of complaints pertaining to illegal dumping,” he says, attempting to explain why the sergeant stopped Henderson. “There’s a cargo van that’s parked in front of that home where there appears to be trash that’s being offloaded. That is the genesis of the stop.”

Henderson told MSNBC that he’s been a resident of the neighborhood for a year and wasn’t aware of such complaints.

“I can’t really speak to the validity of what he’s saying,” he said, referring to Colina’s statements.

Henderson did not respond to the Daily Dot’s request for comment.