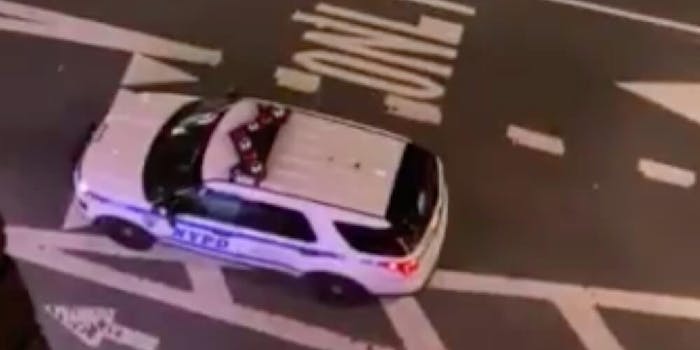 Video shows officer swearing at pedestrian ‘in distress’ over megaphone

Two NYPD officers are under investigation.

The New York Police Department is investigating after a video showed officers blasting curse words via patrol car megaphone at a man who appeared to be in distress.

Activist Eliel Cruz shared the now-viral video on Twitter and claimed his friend filmed it in Manhattan, New York.

“This went on for a very long time,” Cruz said in a follow-up tweet.

The 2-minute clip shows an NYPD car approaching a building in a mostly empty street. A person shouts something unclear. The video is recorded from a few floors above the street level.

“Shut the fuck up!” the officer says into the megaphone.

“No,” the man responds loudly. It’s unclear from the video where the man is standing, but the interaction appears to take place near an empty parking lot.

“Shut up!” the megaphone blasts again.

The man tries to say something and everytime, he is interruped by the megaphone blasting “Fuck you” and “shut up.”

“We gonna fuck you up!” the man is heard yelling at one point, while the megaphone continues swearing.

The streets are mostly empty, though a few cars pass by.

While the man goes on incoherently, the NYPD official is heard saying on the megaphone, “Shut the fuck up or I’m gonna smack the shit out of you!”

The man continues to yell, and the officer loudly says “yes” a few times.

There is silence for a few seconds before another NYPD car approaches.

“Shut the fuck up!” the megaphone says again.

“Stop!” the man screams. At this point, the video zooms in on the cop car, so it’s not clear what is happening with the man.

He continues to scream “stop” while the megaphine repeatedly blasts “Fuck you!”

The video gained more than 800,000 views in a day. Many criticized what appeared to be verbal abuse by law enforcement.

On Thursday, two officers who were on patrol duty at the time were being investigated for the incident, the Associated Press reported.

The NYPD also said via Twitter there would be an internal investigation would be “conducted as expeditiously as possible.”

NYPD Chief of Transit Chief Edward Delatorre responded to Cruz’s tweet and said he was “equally alarmed” by the incident.