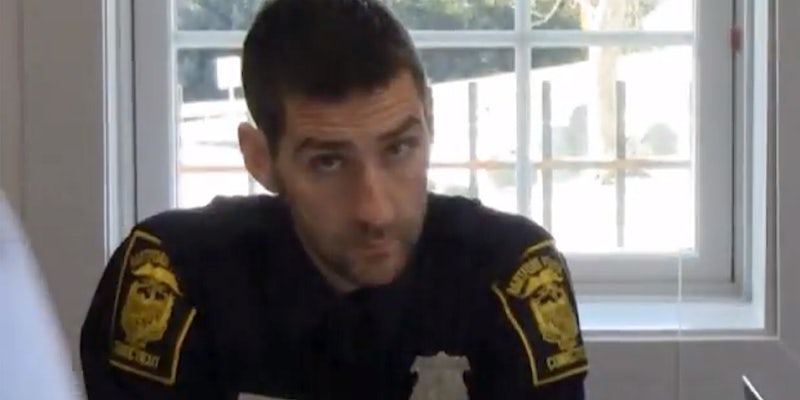 He also said he gets 'paid a ton of money in overtime if I have to shoot somebody.'

An officer who went viral for telling a group of people he was “trigger-happy” has been fired from the Hartford Police Department in Connecticut.

The video, originally posted on Facebook in early August, showed Stephen Barone speaking to a group who were hanging out on a porch. At the beginning of the video, he explains to them that he just wants to figure out what’s going on because a group of people outside of a house without the lights on can look suspicious.

“No big deal,” Barone says. Then his tone shifts abruptly. He explains that they’re all being stopped for suspicion of trespassing and says, “If anybody wants to fight or run, I’m a little trigger-happy, guys, I’m not gonna lie.”

He went on to say that he will be “paid a ton of money in overtime if I have to shoot somebody, so don’t do anything stupid.”

The group seems bewildered by this, one of them replying, “Trigger-happy for what?” The man recording the video calls it “spooky” and another can be heard saying, “You saying ‘trigger-happy,’ that’s why people run.”

Rashawn Johnson, the person who recorded the video of Barone, said to NBC Connecticut, “We were all just in shock to hear him say that and glad there were other officers there that were more professional about their job.”

On Wednesday, the Hartford Police Department put out a statement that they had fired Barone after finishing an investigation into the incident in the video, as well as a traffic incident in July.

“Our success as a police department depends on our relationship with the community we serve,” said Police Chief David Rosado. “This officer’s conduct does not reflect the values of our agency. I did not make this decision lightly. We hold ourselves to high standards, and when we fall short, we take responsibility for it.”